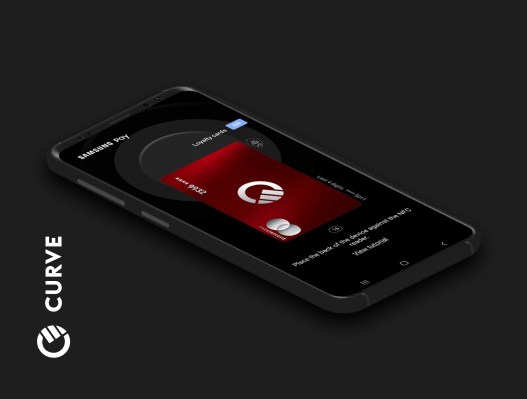 Curve, the London-based “over-the-top banking platform,” has added support for Samsung Pay in the U.K., making it easy for Samsung smartphone owners to pay using their mobile phone, regardless of who they bank with.

The new feature is enabled by Curve’s ability to consolidate all of your bank cards into a single Curve card. This means that once you register your Curve card with the Samsung Pay app, you can link any of your other Mastercard and Visa debit or credit cards too.

That’s potentially quite significant for Samsung customers because of the lack of Samsung Pay support from many of the major banks who prefer instead to build NFC-enabled payments into their own banking apps.

Unlike Apple, which tightly controls the iPhone’s NFC technology and therefore arguably forces banks to work with them, the NFC tech in Samsung and other Android phones can be accessed by third-party developers. This means there is less incentive for banks to support competing NFC apps, including digital wallets such as Samsung Pay and Google Pay.

Related to this, I’m hearing from sources that Curve may be adding support for Google Pay in the coming weeks. Apple Pay is also known to be in the works. The company declined to comment.

Meanwhile, the roll out of Samsung Pay follows Curve’s $55 million Series B round announced in June, which valued the company at $250 million. At the time, Curve said it would use the new capital to continue adding more features to its platform and for further European expansion.

Like a plethora of fintech startups, Curve wants to turn your mobile phone into a financial control centre that re-bundles disparate financial products or functionality to offer a single app to help you manage “all things money.”

However, rather than building a new current account — as is the case with the challenger banks such as Monzo, Starling and Revolut — Curve’s “attack vector” is a card and app that lets you connect all of your other debit and credit cards so you only ever have to carry a single card.

Now with Samsung Pay support, for NFC-enabled purchases you only need to carry your Samsung phone.