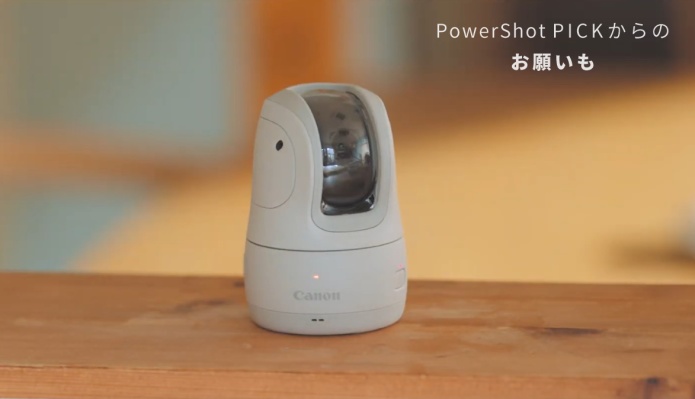 Canon is embracing the AI-infused future with a strange new robotic camera called the PowerShot PICK. This little device swivels and keeps its subjects in view, taking commands or snapping shots on its own.

It’s a bit like a smart security camera or Facebook’s Portal, but meant to be taken with you wherever you go, attached to a selfie stick, and so on. Its body is about the size of a juice box, making it portable but not quite pocketable.

The camera company appears to be hedging its bets by offering the PICK not as a retail product but through the Japanese crowdfunding site Makuake, where it has already blasted through its trumpery $10,000 goal (currently at about 10 times that, which is still just a fraction of what it must have cost to develop this thing).

A promo video for the campaign shows the PICK being used in a variety of circumstances: recognizing faces and shooting during a party; tracking a person riding a bike around their yard; activating itself on demand in someone’s kitchen and following their position.

The sensor is small, an old point-and-shoot’s 1/2.3″ 12MP, though the F/2.8 zoom lens and image stabilization should help it out in uneven light. We won’t know what the shots look like until they send a few of these out to backers and reviewers.

Is this a ridiculous dead-end gadget from a company desperate to escape the photography industry’s death spiral? Or is it a smart, easy solution for people tired of thinking “ah – someone should get a shot of this”? You can still, of course, tweak and operate the camera from a companion app.

One thing it doesn’t appear to be is a webcam, which seems like a missed opportunity. A swiveling, smart webcam that takes voice commands would be a godsend to many people tired of taking every call in the same shabby rectangle of their improvised home office. Now that we’ve all thoroughly stopped caring about “looking professional” (and if you haven’t stopped… this is your cue), maybe we can start taking meetings while cleaning the kitchen or sitting on the patio.

Hopefully this little experimental device bears fruit for Canon and we’ll all have robot camera buddies we take around with us everywhere. Sounds creepy now, sure, but just wait a few years.