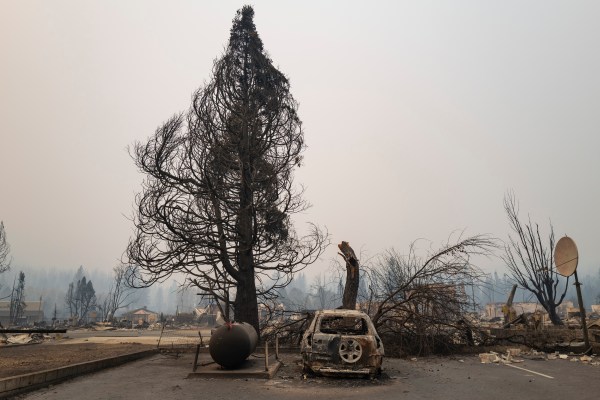 Books on climate change, as diverse as the library is, tend to fall into a couple of categories. There are the field guides and observational accounts that chronicle the destruction of our world and make it legible for readers worldwide. There are the policy and tech analyses that splay out options for the future, deliberating tradeoffs and offering guidance to individuals and governments on their decisions. There are the histories that look at missed opportunities, and the geological histories that show what our world was really like over the eons.

Then there’s the much darker category of dystopia.

Dystopic visions of the future are engaging precisely because they are visions. That makes them easy fodder for climate fiction (“cli-fi”) novels or even video games like Final Fantasy VII, a stream of work that has accelerated much in the way that carbon has in the atmosphere. Yet, it’s a field that almost uniquely remains focused on the imagination, of “what if” scenarios and running those contexts to their narrative conclusions.

What makes “How Everything Can Collapse: A Manual for our Times” a rare read is that it is both dystopic and non-fiction.

The book, which was translated into English last year and first published in French in 2015, argues for a hard acceptance of what the authors Pablo Servigne and Raphaël Stevens dub “collapsology.” Less a movement like the Extinction Rebellion and Deep Adaptation communities that have risen up in the Anglophone world, collapsology is centered around a multi-disciplinary and systematic inquiry into the state of our world, our civilization, and our society. 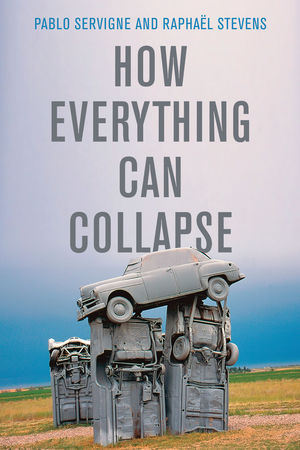 In this, they spurn the American frame of progress and technological advancement to solve challenges, as well as humanity’s innate hopeful desire to see a better world going forward. Instead, they want to understand what’s really happening today, and whether the stresses, shocks, and crises that smash into our consciousness on a regular basis are really just a mirage or a phenomenon far more profound.

It shouldn’t be hard to glean what their answer is. Servigne and Stevens walk through earth systems like energy and food production and more as they scout for tipping points, physical limits, and the other impassable barriers to society’s exponential development. What they find is troubling, of course. Exponential human population growth over more than a century has led to practically insatiable demand for every resource and alimentation that the planet has in stock.

That’s a story many of us are familiar with, but where it gets interesting is when they start to systematically explore what that demand has done for efficiency. Perhaps the most striking example they offered was the history of petroleum and Energy Return on Energy Invested, or the amount of oil and gas it takes to drill for that very resource. ERoEI, they note, has declined from 35:1 in 1990 to a factor today of about 11:1. Fuel is getting harder to find — and that means we use more fuel to drill for less fuel. It’s a negative feedback loop — and worse, an exponential one — and there’s little reason to expect these trends to reverse.

These sorts of negative feedback loops are everywhere in earth systems today if you look closely for them. The permafrost is melting in the Arctic, the Amazon rainforest today emits more carbon dioxide than it absorbs, higher temperatures are making it more difficult and more expensive to grow food. All this at a time when the human population is expected to add several billion more individuals this century.

As with any system, there are lock-ins where components can’t adapt because they are connected to other systems. We can’t replace gas because the entire financial and industrial system is predicated on an abundant and relatively affordable form of energy. We could try to limit the use of automobiles and trucks, but few people (in the West at least) live anywhere near the farms or mining sites where the key sustaining goods of our society come from. Those ears of corn and bags of potatoes are going to have to travel to us, or we to them, but either way, traveling is going to take place.

In the authors’ collective minds, collapsology is about coming to terms with the reality of the systems all around us and just reading the dials. It’s about accepting tipping points, discontinuities, and other non-linear paths in these systems and projecting what they mean for our own lives and those of others. It’s a call to reality, rather than a call to arms. Just look, the authors practically say.

While the first half of the book is mostly centered around exploring systems and how they inter-connect, the second half of the work explores us as humans, and debating collapsology as a phenomenon. Is it too negative? Why do we have psychological barriers that prevent us from seeing the fragility of our ecosystems and our planet? How will art and movies and books adapt to our new context? How are we going to respond to the challenges that are about to confront us in a much more visceral way? The answers — when they are available — are interesting if not always novel.

It’s fascinating to see a bit of a cultural counterpoint to the American sensibility. In some ways, collapsology is just the latest manifestation of French existentialism, updated for the twenty-first century. The book doesn’t provide solutions, nor does it necessarily argue that progress must happen or even that it could happen. Instead, it just observes the human condition, and the conditions around humans. Humans are diverse, and they are going to react to the cataclysm in the diverse ways one would come to expect.

The book offers no solution and paints a dreary future that’s just on the cusp of dystopia. But the title is fascinating, since it posits a conditional rather than an assurance. The world “can collapse” not that it “will collapse.” A reader will be forgiven for thinking the latter is the case the book is making, but ultimately, Servigne and Stevens believe that the only way to avoid collapse is to fully see the world in all its complexity. Collapsology then is really anti-collapsology, or deeply understanding the brittleness of our systems before the limits are reached. That’s a refreshingly intellectual point of view, if not necessary a salve to the fears we read and see and feel every day.

How Everything Can Collapse: A Manual for our Times by Pablo Servigne and Raphaël Stevens. Translated from French by Andrew Brown.