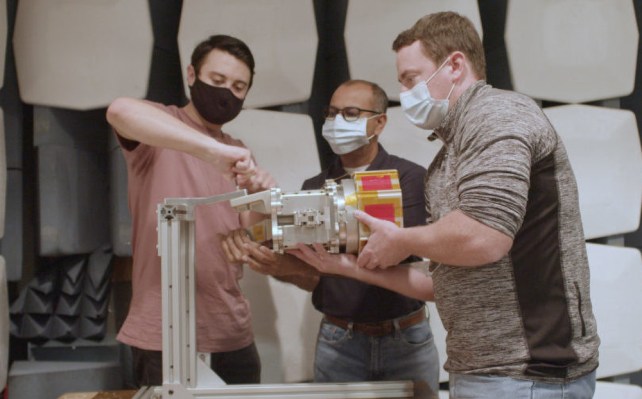 One of the payloads aboard the International Space Station resupply mission that launched last Friday will provide a new perspective on one of the most enervating human experiences — the spacewalk. It’s a custom-made, 3D camera designed to capture content in 360-degrees while in space, and it will be used to film a spacewalk in immersive, cinematic VR for the first time ever on an upcoming ISS astronaut mission.

The camera is the result of a collaboration between Felix & Paul Studios, Time Studios and in-space technology expert Nanoracks. It will ultimately be used to capture the footage that will then be used to produce a culminating episode of a series called “Space Explorers: The ISS Series.” To do that, it’ll be mounted on Nanoracks’ Kaber MicroSatellite deployer device, which will provide it with power, and allow it to be controlled via the Canadarm2 robotic arm that the ISS uses for manipulating external cargo. The team behind this says that the Canadian-made robot arm will essentially be used like a crane on a film set to capture the spacewalk of two ISS astronauts.

In terms of specs, the VR camera includes nine 4K sensors, which can then stitch together a fully immersive 360-degree final image that’s rendered at 8K resolution. The camera, a Z-Cam V1 Pro, has been modified by Nanoracks using their expertise in creating equipment that can operate in and withstand the harsh environment of space — meaning it isn’t all that bothered by vacuum, UV radiation, ionizing radiation, plasma, wildly varying extreme temps that can go from -250 degrees Fahrenheit to +250 depending on sun exposure, and more. The enclosure for the camera is hermitically sealed, includes an aluminum radiation shield, and has both an active heating and passive cooling system, rendering it capable of surviving exposure to space for a full week.

The spacewalk will ultimately be aired via the Oculus Store, and you can already see the first two Space Explorers episodes there right now if you have a compatible VR headset.