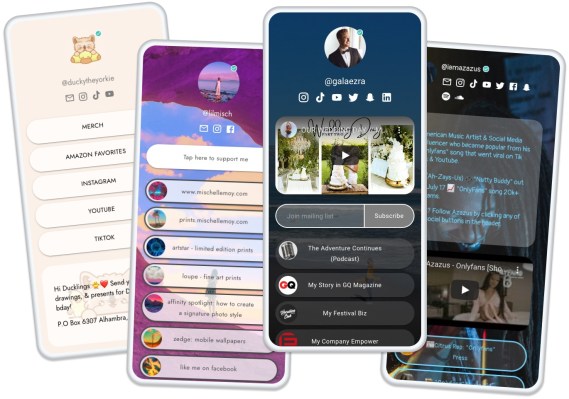 Today, there are a number of website builders aimed at creators who want to point fans to a dedicated landing page from their social media profile. If you’ve spent any time on TikTok or Instagram, you’ve likely come across one of these simplified “link in bio”-style websites — like those hosted by Linktree, for example. A new startup called Beacons is now entering this market with the goal of making “link in bio” websites even more powerful. Its website builder offers creators an expanded set of tools to monetize their community, including through donations, sales, paid requests, affiliate shopping and more.

After signing up for the service, Beacons walks the user through a series of questions, many which can be answered with just a “yes” or “no.” For example, Beacons may ask the user if they want to accept donations or collect followers’ emails, if they make TikTok or YouTube videos, and which category they’re in, in terms of the content they create.

This information is used to set up their Beacons landing page with the right content sections, which Beacons calls “blocks.” At launch, Beacons offers around a dozen of these configurable blocks, like email and SMS collection modules, video embed blocks for TikTok or YouTube creators, music blocks for embedding a track or album, a Twitter block to embed a tweet or Twitter profile, and link blocks, similar to Linktree, among others.

There’s even a “friends” block, which is like a modern-day Myspace Top 8. This lets you link out to your friends on either Beacons, Instagram, Twitter or TikTok.

An area where Beacons differentiates itself from other “link in bio” website builders, however, is with its set of “monetization” blocks. Today, it has four tools for creators who want to generate revenue from their online presence. One of these is similar to Cameo, as it allows the creator to set up a menu of options to take fan requests for personalized content. For instance, fans could ask a fitness influencer to critique their routine, or they could pay to have their burning questions answered by someone they admire. The creator can then send out a personalized response either publicly or privately.

Other monetization blocks allow creators to accept donations or sell digital downloads — like e-books or paid video content, for instance. 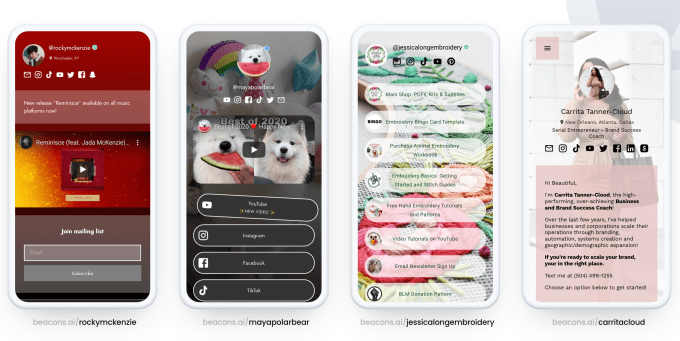 The fourth, and perhaps most interesting, monetization block is a TikTok shopping feature. It allows creators to embed their TikTok videos where they recommend products directly on their Beacons website. From here, they can add affiliate links to the products in question, allowing them to directly generate revenue when fans purchase the items they’ve featured.

This particular feature comes at an opportune time. Today, TikTok is only beginning to formalize its plans around e-commerce. In a recent presentation to marketers, TikTok spoke of its plans to launch new online shopping tools that would allow brands to more directly reach TikTok’s younger audience. TikTok has also partnered with Shopify on social commerce, and has experimented with live video shopping, including with a holiday event hosted by Walmart.

But TikTok’s creators have already been driving shopping trends across categories like fashion, beauty, home décor, household items, toys and much more, to the point that “TikTok made me buy it,” has become a common excuse for the impulse purchases prompted by TikTok’s viral content. By allowing creators to now more directly and financially benefit from these trends is the next logical step. 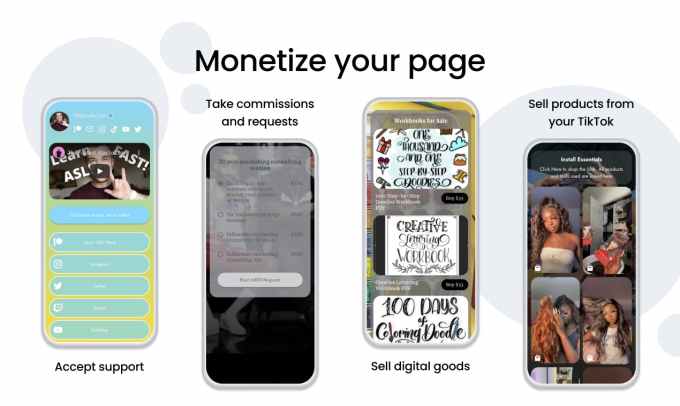 The idea for Beacons comes from co-founders Neal Jean, Jesse Zhang, Greg Luppescu and David Zeng. Neal, Jesse and David met while in the PhD program at Stanford studying different areas of research, like machine learning and AI. Greg, meanwhile, did his Master’s at Stanford, then went on to work at Apple on the Apple Watch team.

Neal, Jesse and David had teamed up on Beacons and went through the Y Combinator Summer 2019 batch, iterating on ideas and pivoting the product several times. Some of those early concepts may eventually return — like a Shopify integration that would connect creators with brands selling on Shopify, for example.

The broader focus, however, had always been on helping creators make money, says Neal.

“Even before our current product, we were really focused on trying to help creators solve monetization,” he explains. “When we kind of made this mini-pivot into the more Linktree-like product, we thought about building features that can help creators actually generate revenue — which I don’t think Linktree or any of the existing incumbents in the space were doing. Even today, you can’t actually make any money through Linktree,” he notes.

Linktree, of course, is only one of many “link in bio” websites on the market today, which means Beacons still faces a lot of competition. Other rivals include Linkin.bio, Lnk.bio, Shorby, Tap.bio, Feedlink.io, Link in Profile, Milkshake, Campsite, bio.fm, url.bio and biolincs.me, for example.

Unlike some of its competitors, Beacons offers its tools for free and instead monetizes through a premium plan ($10/mo) that allows creators to use their own custom domain. It also makes money by taking a percentage of sales on the requests and sales blocks, which is either 9% on the free plan or 5% on the paid plan. This rev share doesn’t bring in much money today — only “hundreds” of dollars — but the team believes that will scale as the startup grows and gains a large user base.

“Our strategy is…to continue building out more of these different kinds of revenue streams for creators,” says Neal. “And as we do that, I think, the fraction of transactional revenue will become higher relative to the subscription revenue than it is today.”

Since launching in private beta last September, Beacons has seen 90,000 sign-ups and now has over 20,000 people who are considered active users of the product — most arrived in the last couple of months when the service began to roll out some of its newer features. So far, Beacons hasn’t done any paid marketing, with around 77% of new users coming to Beacons because they saw it on someone else’s profile.

The team raised a small, post-YC angel round of around $600,000 but is looking to fundraise in the future.