Attentive raises another $40M for mobile messaging, will invest in helping customers respond to COVID-19 – TechCrunch 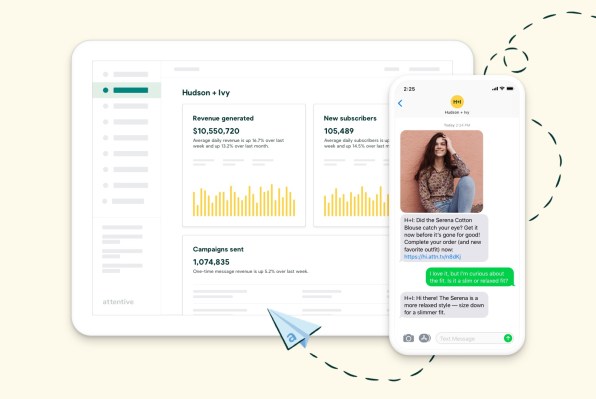 CEO Brian Long (who previously founded TapCommerce with his Attentive co-founder Andrew Jones and sold the company to Twitter) told me that the new funding closed just a week ago. He said the money comes from institutional investors who had wanted to participate in the Series C, but “for whatever reason, the timing didn’t work out.”

Then, as the startup wanted to invest in new areas — particularly in response to the COVID-19 pandemic — Long reached out again. Once they saw Attentive’s numbers for the first quarter of 2020, the firms were willing to invest.

Apparently, the number of new customer sign-ups is only increasing, with Attentive now working with more than 1,000 businesses. Companies like Coach, Urban Outfitters, CB2, PacSun, Lulus and Jack in the Box use the platform to manage their mobile messaging, with tools around adding text message subscribers, creating engaging messages and tracking the results of those campaigns.

And while we’re at the beginning of what’s likely to be a dramatic slowdown in advertising and marketing, Long suggested that even if businesses pull back on acquiring new customers, they’ll still need to maintain a relationship with existing ones.

“CRM is such a critical channel for companies … email and text are the last thing you would shut down,” he said.

Sequoia Capital Global Equities and Coatue are the new investors in the Series C. Sequoia’s venture fund already led (or co-led) the Series C and the Series B, but Long said he was interested in working with the firm’s crossover fund — and with Coatue — partly because they invest in public companies as well.

Not that he has immediate plans for Attentive to go public, but he said, “It just creates optionality,” so that there are fewer financial pressures regardless of the route the company takes.

“Attentive’s rapid growth is an indicator of how consumers are eager to find a more direct, personalized and efficient channel to interact with businesses,” said Jeff Wang, managing partner at Sequoia Capital Global Equities, in a statement. “We’ve been impressed by how quickly Attentive’s business has scaled, its strong customer momentum, and the expertise of the team. We are thrilled to increase Sequoia’s partnership with Attentive through our Global Equities fund.”

As for how Attentive is responding to COVID-19, the startup plans to create funds to help customers navigate the economic fallout. There will be more details released in the coming weeks, but Long said the idea is to launch funds focused on the e-commerce/retail, food/beverage and educational sectors, providing free access to Attentive tools and services “to help those companies get recharged.”

Long added that he hopes to grow Attentive’s headcount from 260 employees to more than 400 by the end of this year.