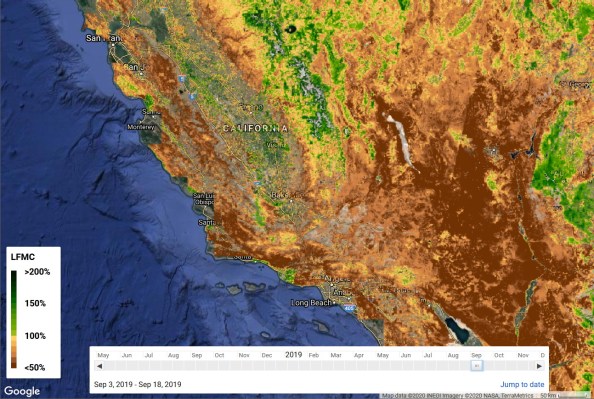 The U.S. has suffered from devastating wildfires over the last few years as global temperatures rise and weather patterns change, making the otherwise natural phenomenon especially unpredictable and severe. To help out, Stanford researchers have found a way to track and predict dry, at-risk areas using machine learning and satellite imagery.

Currently the way forests and scrublands are tested for susceptibility to wildfires is by manually collecting branches and foliage and testing their water content. It’s accurate and reliable, but obviously also quite labor intensive and difficult to scale.

Fortunately, other sources of data have recently become available. The European Space Agency’s Sentinel and Landsat satellites have amassed a trove of imagery of the Earth’s surface that, when carefully analyzed, could provide a secondary source for assessing wildfire risk — and one no one has to risk getting splinters for.

This isn’t the first attempt to make this kind of observation from orbital imagery, but previous efforts relied heavily on visual measurements that are “extremely site-specific,” meaning the analysis method differs greatly depending on the location. No splinters, but still hard to scale. The advance leveraged by the Stanford team is the Sentinel satellites’ “synthetic aperture radar,” which can pierce the forest canopy and image the surface below.

“One of our big breakthroughs was to look at a newer set of satellites that are using much longer wavelengths, which allows the observations to be sensitive to water much deeper into the forest canopy and be directly representative of the fuel moisture content,” said senior author of the paper, Stanford ecoydrologist Alexandra Konings, in a news release.

The team fed this new imagery, collected regularly since 2016, to a machine learning model along with the manual measurements made by the U.S. Forest Service. This lets the model “learn” what particular features of the imagery correlate with the ground-truth measurements.

They then tested the resulting AI agent (the term is employed loosely) by having it make predictions based on old data for which they already knew the answers. It was accurate, but most so in scrublands, one of the most common biomes of the American west and also one of the most susceptible to wildfires.

You can see the results of the project in this interactive map showing the model’s prediction of dryness at different periods all over the western part of the country. That’s not so much for firefighters as a validation of the approach — but the same model, given up to date data, can make predictions about the upcoming wildfire season that could help the authorities make more informed decisions about controlled burns, danger areas, and safety warnings.

The researchers’ work was published in the journal Remote Sensing of Environment.