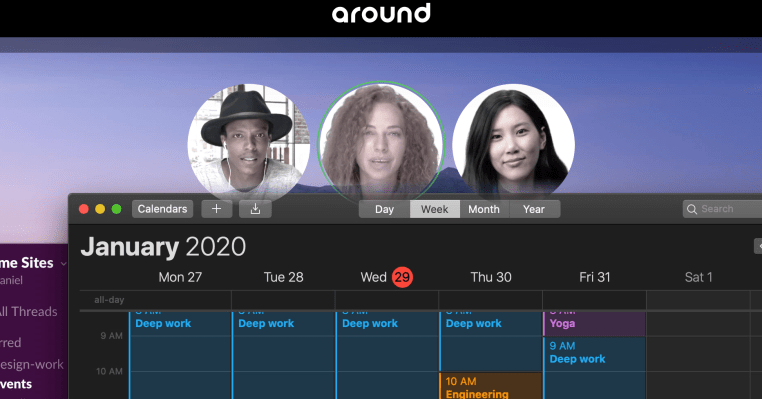 You have to actually get work done, not just video call all day, but apps like Zoom want to take over your screen. Remote workers who need to stay in touch while staying productive are forced to juggle tabs. Meanwhile, call participants often look and sound far away, dwarfed by their background and drowned in noise.

Today, Around launches its new video chat software that crops participants down to just circles that float on your screen so you have space for other apps. Designed for laptops, Around uses auto-zoom and noise cancelling to keep your face and voice in focus. Instead of crowding around one computer or piling into a big-screen conference room, up to 15 people can call from their own laptop without echo — even from right next to each other.

“Traditional videoconferencing tries to maximize visual presence. But too much presence gets in the way of your work,” says Around CEO Dominik Zane. “People want to make eye contact. They want to connect. But they also want to get stuff done. Around treats video as the means to an end, not the end in itself.”

Around becomes available today by request in invite-only beta for Mac, windows, Linux, and web. It’s been in private beta since last summer, but now users can sign up here for early access to Around. The freemium model means anyone can slide the app into their stack without paying at first. 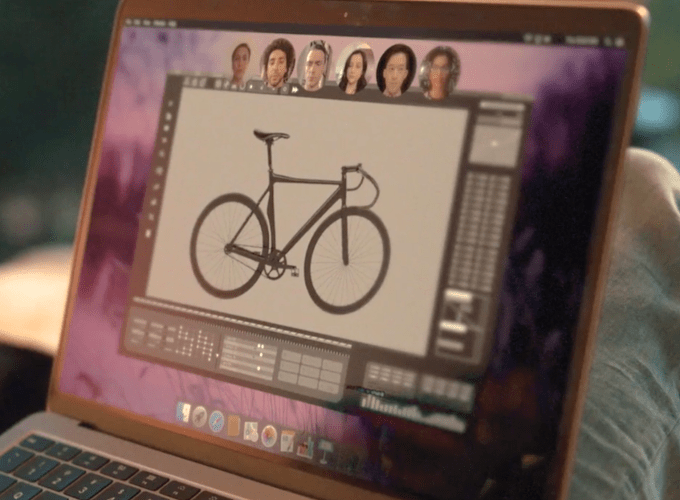 Not Just A Picturephone 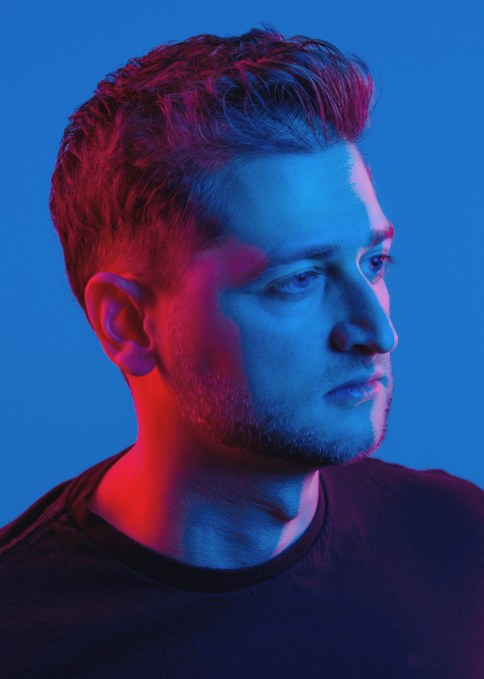 Around was born out of frustration with remote work collaboration. Zane and fellow Around co-founder Pavel Serbajlo had built mobile marketing company M.dot that was acquired by GoDaddy by using a fully distributed team. But they discovered that Zoom was “built around decades-old assumptions of what a video call should be” says Zane. “A Zoom video call is basically a telephone connected to a video camera. In terms of design, it’s not much different from the original Picturephone demoed at the 1964 World’s Fair.”

So together, they started Around as a video chat app that slips into the background rather than dominating the foreground. “We stripped out every unnecessary pixel by building a real-time panning and zooming technology that automatically keeps callers’ faces–and only their faces–in view at all times” Zane explains. It’s basically Facebook Messenger’s old Chat Heads design, but for the desktop enterprise.

Calls start with a shared link or /Around Slack command. You’re never unexpectedly dumped into a call, so you can stay on task. Since participants are closely cropped to their faces and not blown up full screen, they don’t have to worry about cleaning their workspace or exactly how their hair looks. That reduces the divide between work-from-homers and those in the office.

As for technology, Around’s “EchoTerminator” uses ultrasonic audio to detect nearby laptops and synchronization to eliminate those strange feedback sounds. Around also employs artificial intelligence and the fast CPUs of modern laptops to suppress noise like sirens, dog barks, washing machines, or screaming children. A browser version means you don’t have to wait for people to download anything, and visual emotes like “Cool idea” pop up below people’s faces so they don’t have to interrupt the speaker.

Traditional video chat vs Around

“Around is what you get when you rethink video chat for a 21st-century audience, with 21st-century technology,” says Initialized co-founder and general partner Garry Tan. “Around has cracked an incredibly difficult problem, integrating video into the way people actually work today. It makes other video-call products feel clumsy by comparison.”

There’s one big thing missing from Around: mobile. Since it’s meant for multitasking, it’s desktop/laptop only. But that orthodoxy ignores the fact that a team member on the go might still want to chime in on chats, even with just audio. Mobile apps are on the roadmap, though, with plans to allow direct dial-in and live transitioning from laptop to mobile. The 15-participant limit also prevents Around from working for all-hands meetings.

Competing with video calling giant Zoom will be a serious challenge. Nearly a decade of perfecting its technology gives Zoom super low latency so people don’t talk over each other. Around will have to hope that its smaller windows let it keep delays down. There’s also other multitask video apps like Loom’s asynchronously-recorded video clips that prevent distraction.

With coronavirus putting a new emphasis on video technology for tons of companies, finding great engineers could be difficult. “Talent is scarce, and good video is hard tech. Video products are on the rise. Google and large companies snag all the talent, plus they have the ability and scale to train audio-video professionals at universities in northern Europe” Zane tells me. “Talent wars are the biggest risk and obstacle for all real-time video companies.”

But that rise also means there are tons of people fed up with having to stop work to video chat, kids and pets wandering into their calls, and constantly yelling at co-workers to “mute your damn mic!” If ever there was a perfect time to launch Around, it’s now.

“Eight years ago we were a team of locals and immigrants, traveling frequently, moving between locations and offices” Zane recalls. “We realized that this was the future of work and it’s going to be one of the most significant transformations of modern society over the next 30 years . . . We’re building the product we’ve wanted for ourselves.”

One of the best things about working remotely is you don’t have colleagues randomly bugging you about superfluous nonsense. But the heaviness of traditional video chat swings things too far in the other direction. You’re isolated unless you want to make a big deal out of scheduling a call. We need presence and connection, but also the space to remain in flow. We don’t want to be away or on top of each other. We want to be around.