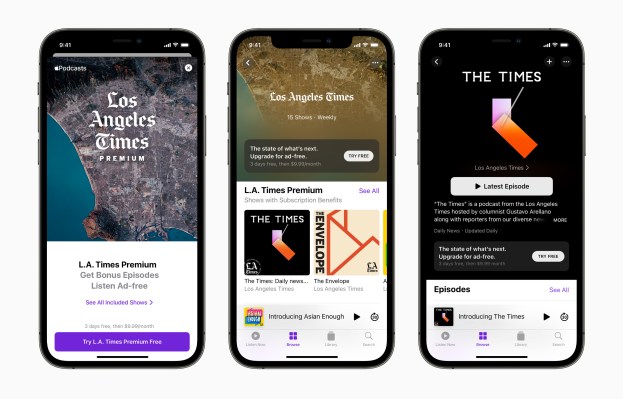 Apple Podcasts Subscriptions are now live across more than 170 countries and regions, Apple announced this morning. First unveiled this spring, subscriptions allow listeners to unlock additional benefits for their favorite podcasts, including things like ad-free listening, early access to new episodes, bonus material, exclusives or whatever else the podcast creator believes will be something their fans will pay for. Channels allow podcasters to group their shows however they like — for instance, to highlight a set of shows with a shared theme, or to offer different mixes of free and paid content.

The new subscription features were initially set to arrive in May, but Apple later emailed creators that the launch was being pushed to June. This was likely due to a series of back-end issues impacting the service, including things like delayed episodes and malfunctioning analytics, among other things.

At launch, Apple says there are thousands of subscriptions and channels available, with more expected to arrive on a weekly basis.

When listeners purchase a subscription to a show, they’ll automatically follow the show in the redesigned Apple Podcasts app. The show’s page will also be updated with a Subscriber Edition label, so they’ll be able to more easily tell if they have access to the premium experience.

The app’s Listen Now tab will expand with new rows that provide access to paid subscriptions, including their available channels.

In the app, users can discover channels from show pages and through Search, browse through recommendations from the Listen Now and Browse tabs, and share channels with friends through Messages, Mail and other apps.

Apple’s delay to invest in the Podcasts market has given its rivals a head start on growing their own audience for podcasts. At the time of the spring announcement of subscriptions, for example, an industry report suggested that Spotify’s podcast listeners would top Apple’s for the first time in 2021.

Despite the competition, Apple is betting its massive install base will bring in creators. Those creators agree to pay Apple a 30% cut of their subscription revenue in year one, just like subscription-based iOS apps. That cut drops to 15% in year two. Spotify, by comparison, is taking no revenue cut for the next two years while its program gets off the ground. It will then take only a 5% fee.

Based on the debut lineup, it seems many creators and studios believe Apple’s footprint is worth the larger revenue share. 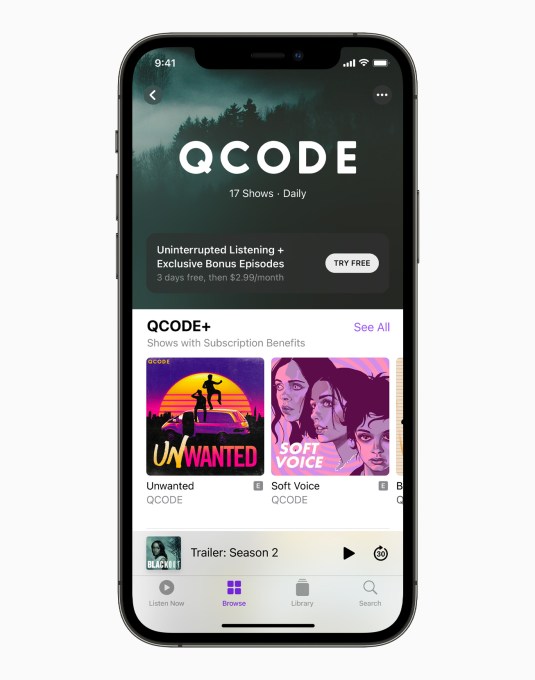 Kids’ podcasts are also available, including those from GBH, Gen-Z Media, Pinna, Wonkybot Studios, TRAX from PRX and others.

Apple also highlighted independent creators offering subscriptions like “Birthful” with Adriana Lozada, “Pantsuit Politics” with Beth Silvers and Sarah Stewart Holland, “Snap Judgment” with Glynn Washington and “You Had Me At Black” with Martina Abrams Ilunga. 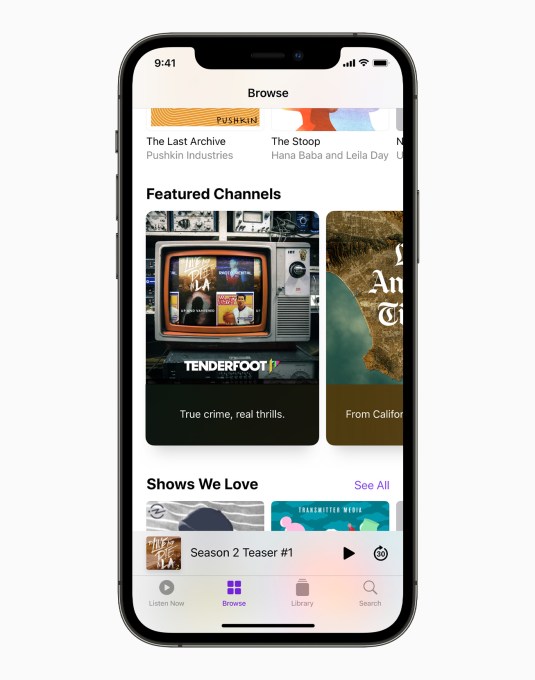 Meanwhile, international subscriptions and channels are being offered from ABC, LiSTNR and SBS from Australia; Abrace Podcasts from Brazil; CANADALAND and Frequency Podcast Network from Canada; GoLittle from Denmark; Europe 1, Louie Media, and Radio France from France; Der Spiegel, Podimo, and ZEIT ONLINE from Germany; Il Sole 24 Ore and Storielibere.fm from Italy; J-WAVE from Japan; Brainrich from Korea; libo/libo from Russia; Finyal Media from the UAE; and Broccoli Productions, The Bugle, Content Is Queen, the Guardian, Immediate Media, and Somethin’ Else from the U.K.

Subscriptions start at $0.49 U.S. per month and go up, with some popular shows priced at $2.99 per month and some channels, like Luminary, at $4.99 per month, to give you an idea of pricing. Apple Card users get a 3% cash back on their subscriptions, which can be viewed in Apple Wallet.

Subscriptions were announced alongside a redesigned version of the Apple Podcasts app, which has received a number of usability complaints and sent some users in search of third-party apps. Apple has been responding to user feedback and addressed some issues in the iOS 14.6 update with other Library tab updates planned to arrive in future releases, perhaps iOS 14.7.