Last month, Apple announced it would soon add lossless audio streaming and Spatial Audio with support for Dolby Atmos to its Apple Music subscription at no extra charge. That upgrade has now gone live, Apple announced this morning — though many noticed the additions actually rolled out yesterday, following the WWDC keynote.

The lossless tier begins at CD quality — 16 bit at 44.1 kHz, and goes up to 24 bit at 48 kHz, Apple previously said. Audiophiles can also opt for the high-resolution lossless that goes up to 24 bit at 192 kHz. Apple has said you’ll need to use an external, USB digital-to-analog converter to take advantage of the latter — simply plugging in a pair of headphones to an iPhone won’t work.

Apple Music subscribers will be able to enable the new lossless option under Settings > Music > Audio quality. Here, you’ll be able to choose the different resolutions you want to use for different connections, including Wi-Fi, cellular and download.

When you make your selection in Settings, iOS warns that lossless files will use “significantly more space” on your device, as 10 GB of storage would allow you to store approximately 3,000 songs at high quality, 1,000 songs with lossless or 200 songs with high-res lossless. 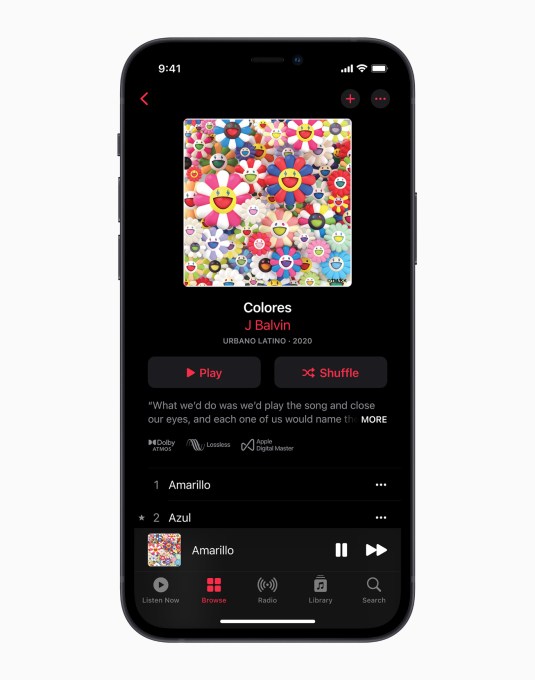 Meanwhile, Spatial Audio will be enabled by default on hardware that supports Dolby Atmos, like Apple’s AirPods and Beats headphones with an H1 or W1 chip. The latest iPhone, iPad and Mac models also support Dolby Atmos. Spatial Audio on Apple Music will also be “coming soon” to Android devices, Apple said.

To kick off the launch, Apple Music is today rolling out new playlists designed to showcase Spatial Audio. These include:

Apple is also adding a special guide to Spatial Audio on Apple Music, which will help music listeners hear the difference. This will include tracks from artists like Marvin Gaye and The Weeknd, among others. And Apple will air a roundtable conversation about Spatial Audio featuring top sound engineers and experts, hosted by Zane Lowe at 9 a.m. PT today on Apple Music.

Because songs have to be remastered for Dolby Atmos specifically, these guides and playlists will help music fans experience the new format without having to hunt around. Apple says it’s working with artists and labels to add more new releases and the best catalog tracks in Spatial Audio. To help on this front, Apple notes there are various initiatives underway — including doubling the number of Dolby-enabled studios in major markets, offering educational programs and providing resources to independent artists.

Apple also said it will build music-authoring tools directly into Logic Pro. Later this year, the company plans to release an update to Logic Pro that will allow any musician to create and mix their songs in Spatial Audio for Apple Music.