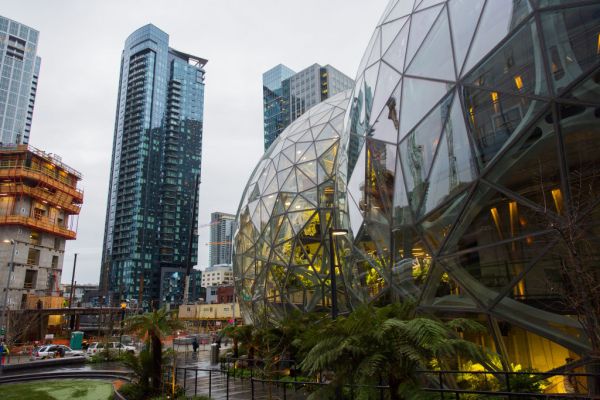 As perennial front-runner for the title of probably-the-most-evil tech company, Amazon has a long way to go to rehabilitate its image as a take-no-prisoners, industry-consolidating wealth machine.

In a bold effort to do so, the company announced today that it would buy the rights to Seattle’s KeyArena, an aging stadium currently under redevelopment in the city. Amazon founder and CEO Jeff Bezos boasts that the stadium will “be the first net zero carbon certified arena in the world.”

“Instead of calling it Amazon Arena, we’re naming it Climate Pledge Arena as a regular reminder of the urgent need for climate action,” Jeff Bezos wrote on Instagram.

Other regular reminders for urgent climate action include the company’s own employees walking out to protest its lack of accountability on climate issues, its ongoing courtship with oil and gas companies and the sheer amount of times in a single day we see Amazon delivery vans dropping packages off on the same block.

Addressing its record of climate indifference, Amazon announced a $2 billion investment in sustainable efforts to reduce the company’s massive carbon footprint earlier this week as part of the same climate-friendly PR blitz.

Bezos himself announced in February that he would invest $10 billion of his personal wealth in a fund to address climate change, which is probably the least you can do when you’ve amassed an amount of wealth that’s incomprehensible to any normal person at the expense of workers, the environment and whatever else got in the way.