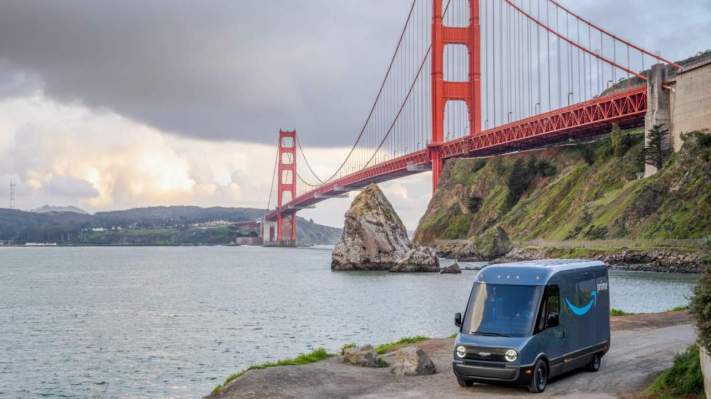 Amazon is expanding customer deliveries via electric cargo vehicle to San Francisco, making the Bay Area the second of 16 total cities the company expects to bring its Rivian-sourced EVs to in 2021.

San Francisco’s unique terrain and climate were a couple of the reasons Amazon said it chose the city for its second round of testing. Its EVs, which were designed and built in partnership with Rivian, can last up to 150 miles on a single charge.

Amazon began testing its electric delivery van in Los Angeles in early February as part of its Climate Pledge, which involves the purchase of 100,000 custom electric delivery vehicles. The company first unveiled the vans last October, and has said it aims to have 10,000 of the vehicles operational by next year.

Bay Area deliveries will initially come out of Amazon’s station in Richmond, California, just one of the many delivery stations the e-commerce giant is redesigning to service its new fleet of EVs. A recent $200 million investment into a new delivery station in the heart of San Francisco signals Amazon’s push to significantly increase deliveries in the city.

“From what we’ve seen, this is one of the fastest modern commercial electrification programs, and we’re incredibly proud of that,” said Ross Rachey, director of Amazon’s global fleet and products in a statement.

Amazon isn’t the only company to recognize the logic behind electrifying delivery fleets for short trips within cities: DHL says zero-emission vehicles already make up 20% of its fleet, UPS has placed an order for 10,000 EVs and FedEx has pledged to replace 100% of its fleet with electric vehicles by 2040.

Early Stage is the premier “how-to” event for startup entrepreneurs and investors. You’ll hear firsthand how some of the most successful founders and VCs build their businesses, raise money and manage their portfolios. We’ll cover every aspect of company building: Fundraising, recruiting, sales, product-market fit, PR, marketing and brand building. Each session also has audience participation built-in — there’s ample time included for audience questions and discussion. Use code “TCARTICLE” at checkout to get 20% off tickets right here.