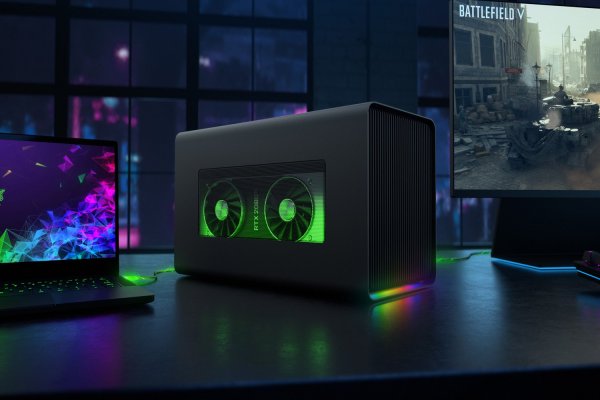 Apple recently announced that they would be transition their Mac line from Intel processors to their own, ARM-based Apple Silicon. That process is meant to begin with hardware to be announced later this year, and last two years according to Apple’s stated expectations, and while new Intel-powered Macs will be released and sold leading up to that time, it does mean that the writing is on the wall for Intel-based Apple hardware. Existing Macs with Intel chips will still be useful long after the transition is complete, however, and software porting means they might even support more of your existing favorite applications for the foreseeable future, which is why adding an external GPU (eGPU) likely makes more sense now than ever.

Apple added support for eGPUs a few years ago, made possible by the addition of Thunderbolt 3 ports on Macs. These have very high throughput, making it possible for a GPU in an internal enclosure to offer almost a much graphics processing capability as one connected internally. But while Apple has directly sold a few eGPUs, and natively supports AMD graphics cards without any special driver gymnastics required, it’s still mostly a niche category. But for anybody looking to extend the life of their existing Mac for a few more years to wait and see how the Apple Silicon transition shakes out, updates from Apple and key software partners make an eGPU a great choice.

Here are a couple of Thunderbolt 3 eGPU enclosure options out there for those considering this upgrade path, and the relative merits of each. Keep in mind that for each of these, the pricing is for the enclosure alone – you’ll have to add your own eGPU to make it work, but the good news is that you can continually upgrade and replace these graphics cards to give your Mac even more of a boost as graphics tech improves. 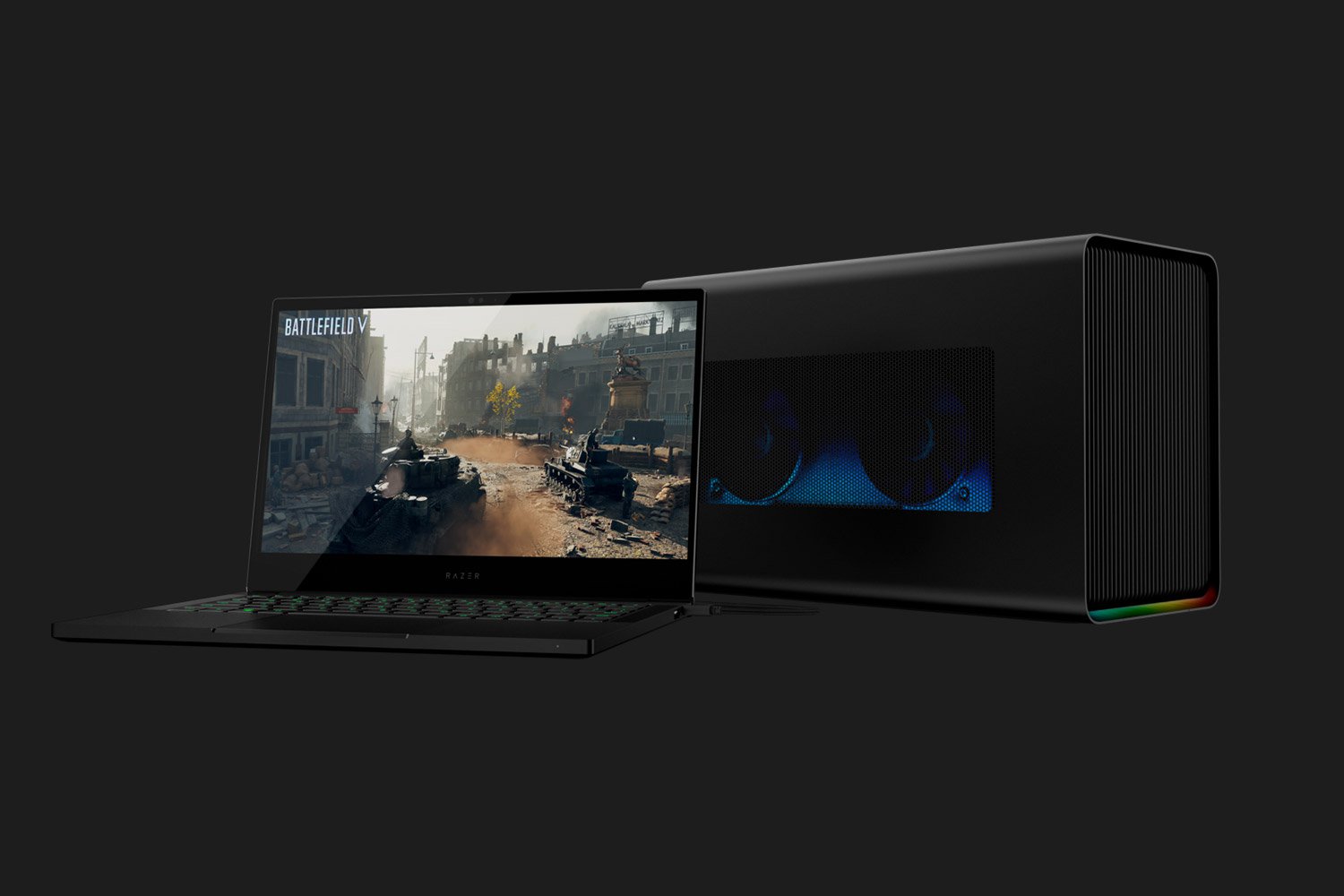 The Razer Core X Chroma is Razer’s top of the line GPU enclosure, and it supports full-sized PCIe graphics cards up to three slots wide, up to a maximum of 500 watts. The integrated power supply provides 700w of power, which enables 100w output for charging any connected laptop, and on the back of the eGPU you’ll find four extra high-speed USB ports, as well as a Gigabit Ethernet port for networking. The Chroma version also comes with tunable LED lighting for additional user customization options. Razer provided me with a Core X Chrome, an AMD Radeon RX 5700 XT and an Nvidia GeForce RTX 2080 Ti for the purposes of testing across both Mac and PC systems.

This isn’t the smallest enclosure out there, but that’s in part because it supports 3-slot cards, which is over and above a lot of the competition. It’s also relatively short and long, making it a great option to tuck away under a desk, or potentially even held in an under-desk mount (with enough clearance for the fan exhaust to work properly). It’s quiet in operation, and only really makes any audible noise when the GPU held within is actually working for compatible software.

Most of my testing focused on using the Razer Core X Chroma with a Mac, and for that use you’ll need to stick with AMD’s GPUs, since Apple doesn’t natively support Nvidia graphics cards in macOS. The AMD Radeon RX 5700 XT is a beast, however, and delivers plenty of horsepower for improving activities like photo and video editing, as well as giving you additional display output options and just generally providing additional resources for the system to take advantage of.

Thanks to Adobe’s work on adding eGPU support to its Lightroom, Photoshop and Premiere products, you can get a lot of improvement in overall rendering and output in all those applications, particularly if you’re on a Mac that only has an integrated GPU. Likewise with Apple’s own applications, including Final Cut Pro X.

In my experience, using the eGPU greatly improved the export function of both Adobe and Apple’s pro video editing software, cutting export times by at least half. And working in Lightroom was in general much faster and more responsive, with significantly reduced rendering times for thumbnails and previews, which ordinarily take quite a while on my 2018 Mac mini.

Apple also uses eGPUs to accelerate the performance of any apps that use Metal, OpenGL and OpenCL, which is why you may notice a subtle general improvement in system performance when you plug one in. It’s hard to quantify this effect, but overall system performance felt less sluggish and more responsive, especially when running a large number of apps simultaneously.

The Razer Core X Chrome’s extra expansion slots, quiet operation and max power delivery all make it the top choice if you’re looking for an enclosure to handle everything you need, and it can provide big bumps both to Macs and Windows PCs alike – and both interchangeably, if you happen to use both platforms. 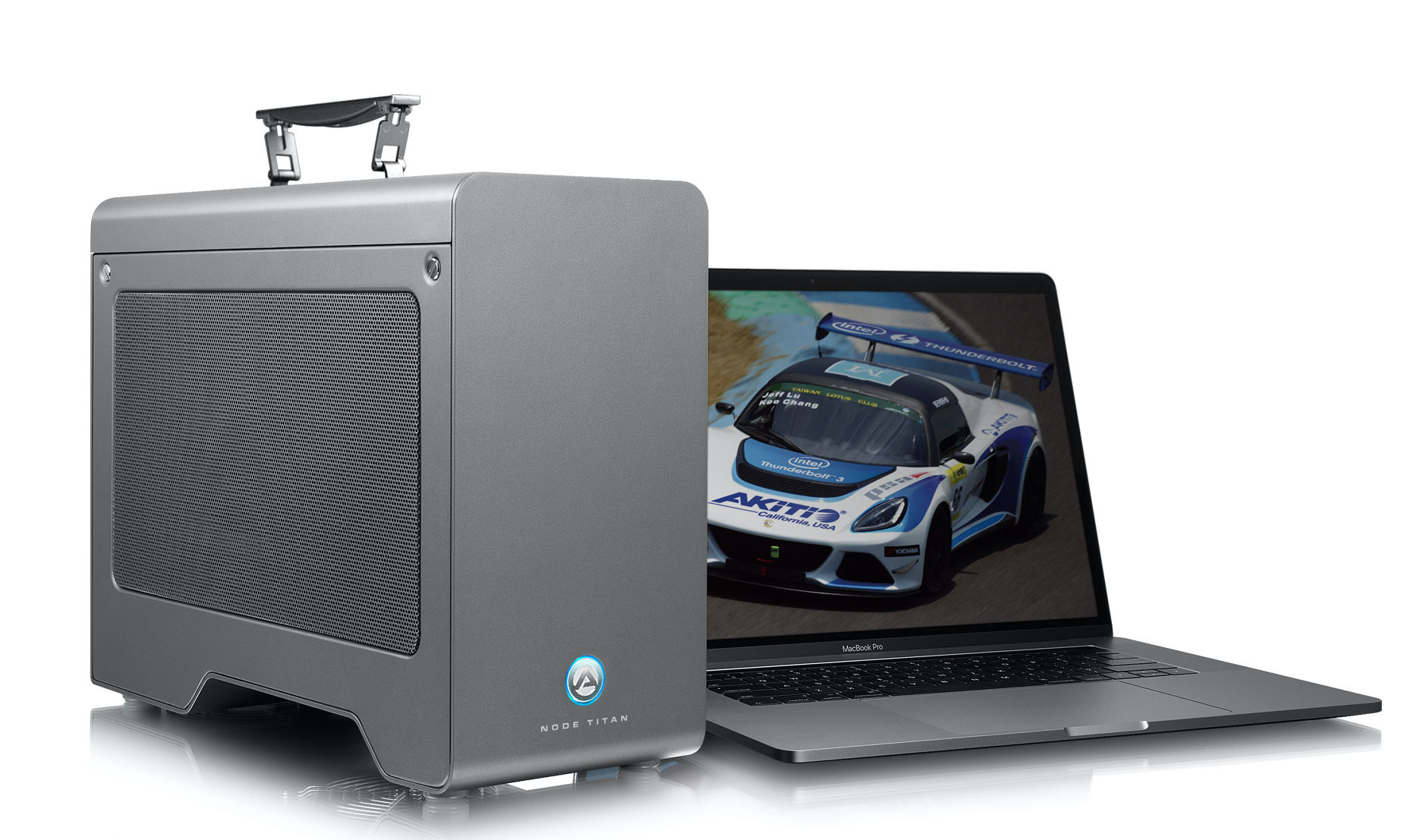 If you’re looking to spend a little less money, and get an enclosure that’s a bit more barebones but that still offers excellent performance, check out the Akitio Node Titan. Enclosure maker Akitio was acquired by OWC, a popular Mac peripheral maker and seller that has provided third-party RAM, docks, drives and more for decades. The Node Titan is their high-end eGPU enclosure.

The case for the Node Titan is a bit smaller than that of the Razer Core X, and is finished in a space gray-like color that will match Apple’s Mac notebooks more closely. The trade-off for the smaller size is that it only supports 2-slot graphics cards, but it also features an integrated pop-out handle that makes it much more convenient, combined with its lighter, more compact design, for taking with you place to place.

Akitio’s Node Titan packs in a 650w power supply, which is good for high-consumption graphics cards, but it also means that another compromise for this case vs. the Core X Chrome is that the Titan supplies only 85w output to any connected laptops. That’s under the 96W required for full-speed charging on the latest 16-inch MacBook Pro, though it’s still enough to keep your notebook powered up and provide full-speed charging to the rest of Apple’s Mac notebook lineup.

The Node Titan also provides only one port on the enclosure itself – a Thunderbolt output for connecting to your computer. Graphics cards you use with it will offer their own display connections, however, for attaching external displays.

In terms of performance, the Akitio Node Titan offers the same potential gains with the AMD Radeon RX 5700 XT for your Mac (and both AMD and Nvidia cards for PCs) when connected, since the GPU specs are what matter most when working with an enclosure. It operates a little more noisily, especially in terms of making a quiet, but still detectable constant hum even when the GPU is not being taxed.

The Node Titan is still an excellent choice, however, and potentially a better one for those looking for more portability and a bit more affordability at the expense of max notebook power output and a host of handy port expansions.

Back when more Macs had the option for user-expandable RAM, that was a great way to squeeze a little more life out of external machines and make a slowing machine feel much faster. Now, only a few Macs in Apple’s lineup make it easy or even possible to upgrade your memory. Adding an eGPU can have a similar effect, especially if you spend a lot of time in creative editing apps, including Adobe’s suite, Apple’s Pro apps, or various other third-party apps including DaVinci Resolve.

The total price of an eGPU setup, including card, can approach or even match the price of a new Mac, but even less expensive cards offer significant benefit, and you can always swap that out later depending on your needs. It is important to note that the future of eGPU support on Apple Silicon Macs isn’t certain, even though Apple has said they’ll support Thunderbolt. Still, an eGPU can stave off the need for an upgrade for years, making it easier to wait and watch to see what the process transition really means for Mac users.