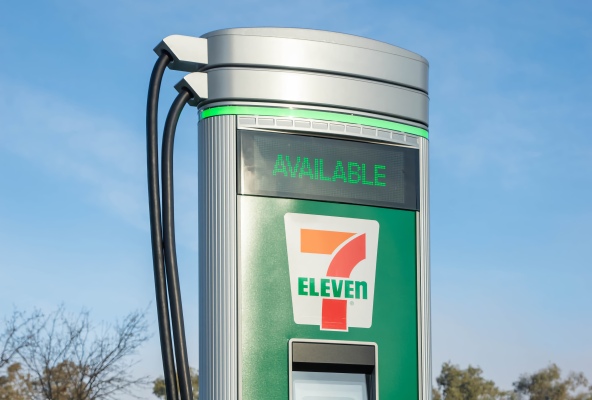 Convenience stores are ubiquitous — and they sell the vast majority of gas purchased by consumers in the United States. But as more Americans transition to electric vehicles, a major reason people visit convenience stores will disappear.

Industry giant 7-Eleven is looking to capture this growing market of EV drivers. The company said Tuesday it will install 500 direct-current fast charging ports at 250 locations across North America by the end of 2022. These charging stations will be owned and operated by 7-Eleven, as opposed to fuel at its filling stations, which must be purchased from suppliers.

Many charging stations from some of the country’s largest providers, like EVgo, ChargePoint or Tesla’s Supercharger network, are located in a patchwork of parking lots adjacent to shopping malls or retailers like Target. But a major draw of convenience stores like 7-Eleven is that they’re already located in areas adjacent to highways or major roads — so they may have a leg up in attracting drivers.

7-Eleven may have another advantage in choosing to install DC fast chargers as opposed to slower level 2 chargers: The majority of convenience retailers are designed for quick, in-and-out service — around the time it takes to fill a tank of gas. Many don’t offer temperature-controlled places to sit, so a longer charging time would likely pose a problem for drivers. While older EV models are limited by the amount of kilowatt charges they can accept (so the output rate of the charger is inconsequential to how long it takes to charge the battery), newer vehicles can accept a wider range of charging rates.

As charging infrastructure — or lack thereof — remains one of the largest barriers to EV adoption, planned build-outs from mainstream retailers like the one announced by 7-Eleven could help reduce some consumer hesitancy over EVs.