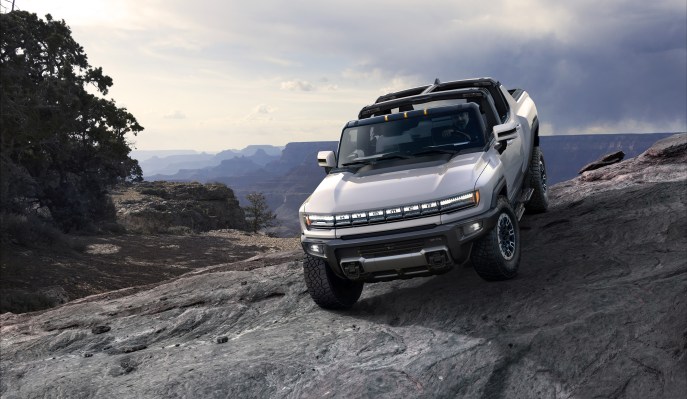 General Motors today revealed the GMC Hummer EV, its first electric pickup. The vehicle has a 350-mile range, 1,000 HP and up to 11,500 pound feet of torque (through fuzzy math). And with a starting price of $80,000, it’s easily twice the cost of a gas-powered pickup. Yes, it sort of looks like the Tesla Cybertruck.

Several key stats stick above the rest. Three motors within two Ultium drive units power the vehicle and it appears to have the longest battery of any GM vehicle with an electric powertrain. GM says the Hummer EV can hit 60 mph in around three seconds. It also has all-wheel steering, which allows it to drive diagonally in a mode called Crabwalk. There are removable roof panels, 35-inch tires and an air suspension system that can raise the vehicle six inches.

Some details are still missing, including the capacity of the battery, and towing capacity. For truck buyers, numbers around power and torque are secondary to what they mean in the real world. How much can the vehicle tow? How far can it go? How far can it go when pulling a trailer?

The electric Hummer starts at $80,000. That gets buyers the Hummer EV2, a two-motor version that lacks key advertised features. For $100,000 buyers can get the Hummer EV3x, which includes three motors and torque-vectoring steering. For $90,000, and a release date of Spring 2023, buyers can get the EV2x, which includes air ride and four-wheel steering.

The Hummer brand long stood for excessively large vehicles, and this new incarnation is no different. It’s massive. While GM hasn’t revealed the full dimensions, it comes stock with 35-inch tires and is capable of 37-inch tires. That’s big.

GM built impressive technology into the Hummer EV. The Hummer EV comes with GM’s self-driving technology, Super Cruise, that allows the truck to drive partly autonomously. The battery pack is capable of connecting to an 800 volt charging system that will give the vehicle 100 miles or range in 10 minutes of charging. Buyers can order the Hummer EV with up to 18 cameras, including cameras that sit under the vehicle to help with ground clearance.

It seems GMC is positioning the Hummer EV as a quasi off-roader that’s part pickup and part SUV.

Inside, a 13.4-inch touchscreen dominates the dashboard. The driver’s gauge cluster is digital, as well, with a 12.3-inch screen. Epic’s Unreal Engine powers both screens, which features class-leading animations. This technology is a huge leap forward over GM’s current infotainment system. The vehicle still has plenty of buttons, though, as functions such as climate control are separate from the screen.

The Hummer EV is a big step for General Motors and signals a market shift. GM started its EV push in the ’90s with the EV1, which was revived in spirit with the Volt in 2010. GM released the small Chevy Bolt in 2017. None of these cars sold in large numbers, frankly, because they were uninspiring and, and well, cars. General Motors and others like Ford largely stopped developing cars as the market shifted to SUVs and pickups. GM is moving past the small commuter car with the Hummer EV in favor of a large pickup — a market segment GM knows well.

The Chevy Silverado joins the Ford F-150 and Ram Pickup as the top three selling vehicles in the United States. The three pickups outsold the next six vehicles combined. Trucks are a major market for American automakers, and the Hummer EV is clearly designed to test the water. With a unibody construction, it’s easy to imagine General Motors releasing an SUV version of the Hummer EV too. This would follow GM’s recent roadmap of moving away from cars and into SUVs and crossovers.

The Hummer EV’s unusual shape speaks to engineering limitations and partly explains why the GMC Hummer EV is not branded as a Chevy Silverado or GMC Serra. Much like the Tesla Cybertruck, the Hummer EV is likely based on a unibody construction similar to a passenger car. At this time, or rather when development began on the Hummer EV, it’s likely GM could not produce a unibody pickup with the same key specifications around towing, cargo capacity and range of its Silverado pickups. An electric Silverado (or Ford F-150) must match its internal combustion counterpart on key areas — something the Hummer EV fails to do.

An electric Silverado is in the works. GM’s Mary Barra revealed the obvious during an interview in 2019. The automaker has only released one detail about the upcoming pickup: According to a financial document from July 2020, the electric pickup will have a 400-mile range.

General Motors has another electric pickup in the works through a significant investment with Nikola. On September 8, General Motors announced a $2 million investment in Michigan-based Nikola Motors. With the investment, General Motors gained access to Nikola’s EV development while also agreeing to manufacture Nikola’s Badger pickup. However, the deal is in question after fraud claims caused the company’s chairman to step down.

GM discontinued the Hummer brand during the auto crisis of 2008. It’s largely remembered for the monstrous H1 and H2 SUVs, the first being a civilian version of the military’s Humvee and the second being an over-the-top SUV. Toward the end of Hummer’s life, the company offered a pickup version of its smaller H3 model.

At the time of the Cybertruck’s reveal, Tesla said it would be available starting at $39,000 for a single-motor version capable of pulling 7,500 pounds and driving 250 miles on a charge. An AWD dual-motor and tri-motor version would also be available for $49,000 and $69,000, respectively. It’s unclear if those price points or specs will be true when Tesla releases the Cybertruck.

The Tesla Cybertruck and GMC Hummer EV share a lot in common, including a unibody construction that gives the vehicles their unusual look. Both the Hummer EV and Cybertruck feature unique C pillars that act as a flying buttress. These pillars add significant strength to the vehicle and compensate for the unibody design.

Generally, pickup trucks are built as two pieces: the body is placed on a frame. This is done for several reasons, but most notably here is because a frame can handle the significant twist caused by the drivetrain running from the front axle to the back. And in an EV, truck or car, there isn’t a drivetrain connecting the front and rear axels. This allows the automakers to employ a lighter unibody construction, which is often safer for the occupants. However, these bodies need to be as stiff as possible to help with towing and hauling. Honda leaned into this design with the unibody Ridgeline pickup.

The Hummer EV is a significant step for General Motors as it pushes into the electric future. Some buyers are not ready for electric vehicles, and truck buyers could be among the hardest demographic to convince.

Following the reveal of the Tesla Cybertruck in 2019, the company hooked up a prototype to the tow bar of a newer Ford F-150. The test was widely panned, as many pointed out the flaws that resulted in a Cybertruck win. Tesla was trying to demonstrate that its truck, though electric, can still do truck stuff. GMC will likely employ similar feats of strength, including commercials with gruff men providing a voiceover while the Hummer EV is towing a boat.

Truck buyers expect several things. One, the truck has to have a strong stance, which the Hummer EV has in bundles. Two, most truck buyers look at towing capacity even if they never tow anything. Towing capacity in trucks is much like horsepower in sports cars — the more the better, even if it’s not used. And towing capacity is only partially dictated by the powertrain’s power output. The rest comes from the design of the platform and how it can handle pulling weight. It’s unclear at this point if the Hummer EV, even with its crazy 1,000 HP, will be able to out-tow a Silverado or F-150.

Pickups come with large gas tanks giving them amazing range. For instance, my 2016 Ford F-150 has a 32-gallon tank. If driven carefully, the truck can get 700 miles on one tank. When towing a trailer, the range is cut in half, but exceeds 300 miles on a tank. GMC says the Hummer has a 350 range but has yet to say the range when towing a 7,000 travel trailer.

With a release date of 2022, the Hummer EV is far from a sure bet. GM has plenty of time to rework the machine, adding or decreasing the range as technology improves before its release.

GM has competition too. The electric pickup race is just starting, and Ford has the most to lose.

The Ford F-150 is the top-selling vehicle in the American market, and has been for generations. The truck is the foundation of Ford’s success. In 2019 the company released a video demonstration of an early prototype electric powertrain that was able to pull (note: not tow) 1 million pounds. To help its efforts Ford invested hundreds of millions into Michigan-based Rivian, maker of an electric pickup platform. Recent reports place the viability of that partnership in question, but Ford is likely working at full tilt toward its electric pickups.

Automotive startups are also looking at building electric pickups. Rivian intends to build and sell its own pickup and SUV. Lordstown Motors, an outfit out of Lordstown, Ohio, revealed its pickup design in June and said it would retail for $52,000. And there’s more: Bollinger Motors, Workhorse and Nikola.

Electric pickups are ripe for an electric takeover and GM just threw down a Hummer-sized hammer.