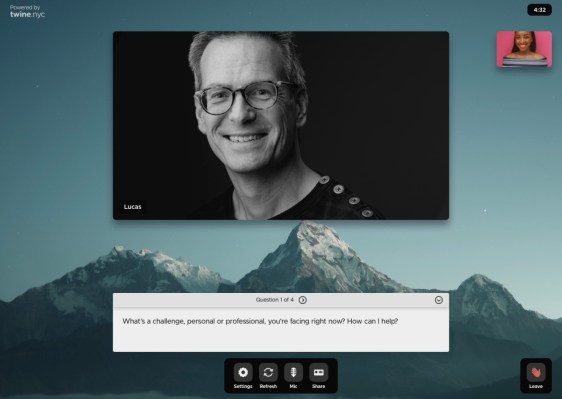 Twine, a video chat startup that launched amid the pandemic as a sort of “Zoom for meeting new people,” shifted its focus to online events and, as a result, has now closed on $3.3 million in seed funding. To date, twine’s events customers have included names like Microsoft, Amazon, Forrester and others, and the service is on track to do $1 million in bookings in 2021, the company says.

The new round was led by Moment Ventures, and included participation from Coelius Capital, AltaIR Capital, Mentors Fund, Rosecliff Ventures, AltaClub and Bloom Venture Partners. Clint Chao, founding partner at Moment, will join twine’s board of directors with the round’s close.

Coburn, previously CEO of DoubleDutch, had been under a non-compete with its acquirer until December 2020, which is one reason why he didn’t first attempt a return to the events space.

The team’s original idea was to help people who were missing out on social connections under COVID lockdowns find a way to meet others and chat online. This early version of twine saw some small amount of traction, as 10% of its users were even willing to pay. But many more were nervous about being connected to random online strangers, twine found. 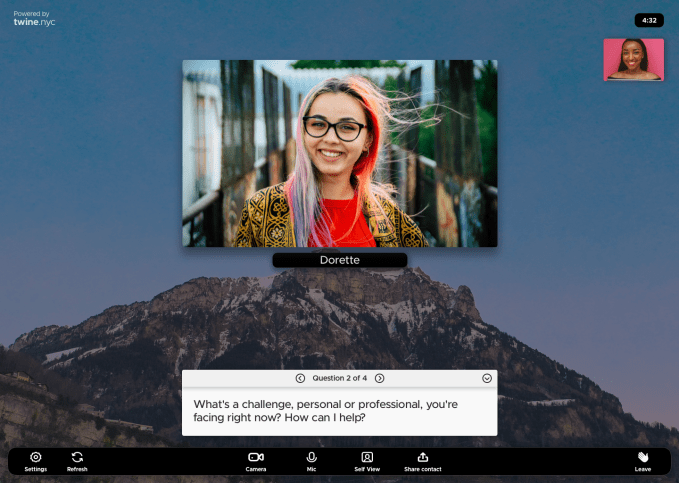 So the company shifted its focus to the familiar events space, with a specific focus on online events which grew in popularity due to the pandemic. While setting up livestreams, text chats and Q&A has been possible, what’s been missing from many online events was the casual and unexpected networking that used to happen in-person.

“The hardest thing to bring to virtual events was the networking and the serendipity — like the conversations that used to happen in an elevator, in the bar, the lobby — these kinds of things,” explains Coburn. “So we began testing a group space version of twine — bringing twine to existing communities as opposed to trying to build our own, new community. And that showed a lot more legs,” he says.

By January 2021, the new events-focused version of twine was up and running, offering a set of professional networking tools for event owners. Unlike one-to-many or few-to-many video broadcasts, twine connects a small number of people for more intimate conversations.

“We did a lot of research with our customers and users, and beyond five [people in a chat], it turns into a webinar,” notes Coburn, of the limitations on twine’s video chat. In twine, a small handful of people are dropped into a video chat experience — and now, they’re not random online strangers. They’re fellow event attendees. That generally keeps user behavior professional and the conversations productive.

Event owners can use the product for free on twine’s website for small events with up to 30 users, but to scale up any further requires a license. Twine charges on a per attendee basis, where customers buy packs of attendees on a software-as-a-service model.

The company’s customers can then embed twine directly in their own website or add a link that pops open the twine website in a separate browser tab.

Coburn says twine has found a sweet spot with big corporate event programs. The company has around 25 customers, but some of those have already used twine for 10 or 15 events after first testing out the product for something smaller.

“We’re working with five or six of the biggest companies in the world right now,” noted Coburn. Because the matches are digital, twine can offer other tools like digital “business card” exchanges and analytics and reports for the event hosts and attendees alike.

Despite the cautious return to normal in the U.S., which may see in-person events return in the year ahead, twine believes there’s still a future in online events. Due to the pandemic’s lasting impacts, organizations are likely to adopt a hybrid approach to their events going forward.

“I don’t think there’s ever been an industry that has gone through a 15 months like the events industry just went through,” Coburn says. “These companies went to zero, their revenue went to zero and some of them were coming from hundreds of millions of dollars. So what happened was a digital transformation like the world has never seen,” he adds.

Now, there are tens of thousands of event planners who have gotten really good at tech and online events. And they saw the potential in online, which would sometimes deliver 4x or 5x the attendance of virtual, Coburn points out.

“This is why you see LinkedIn drop $50 million on Hopin,” he says, referring to the recent fundraise for the virtual conference technology business. (The deal was reportedly for less than $50 million). “This is why you see the rounds of funding that are going into Hopin and Bizzabo and Hubilo and all the others. This is the taxi market, pre-Uber.”

Of course, virtual events may end up less concerned with social features when they can offer an in-person experience. And those who want to host online events may be looking for a broader solution than Zoom + twine, for example.

But twine has ideas about what it wants to do next, including asynchronous matchmaking, which could end up being more valuable as it could lead to better matches since it wouldn’t be limited to only who’s online now.

With the funding, twine is hiring in sales and customer success, working on accessibility improvements and expanding its platform. To date, twine has raised $4.7 million.