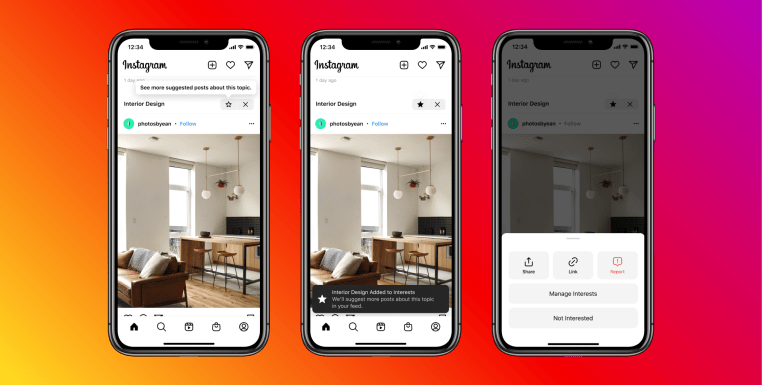 The days of a scrolling to the end of your Instagram feed look to be coming to an end. After adding algorithmic suggestions to the bottom of the app last year, Instagram is running a test that would splice more recommended posts from accounts you don’t follow into the feed with those you do.

In the next few days, the company will begin testing an expansion of “Suggested Posts” which would sprinkle that content through the regular feed. As it stands now, Suggested Posts appear at the bottom of Instagram after you’ve scrolled through all of the content from people you follow and hit the “You’re all caught up” message that the app implemented in 2018. Depending on how many accounts you follow, it’s possible to not run into that message or Instagram’s recommendations very often, if at all.

In addition to boosting the prominence of Suggested Posts, Instagram will test an option that lets users “snooze” the feature, removing it from the feed for 30 days. Anyone in the test will be able to offer feedback when a specific post doesn’t interest them, but it sounds like you won’t be able to disable Suggested Posts in the feed in a permanent way.

The Suggested Posts expansion will be accompanied by a way for users to shape what they see through managing their interests — stuff like cats, makeup or basketball. If you’ve seen enough cats, you can toggle that interest off or tell Instagram that you never wanted to see those damn cats to begin with when it shows you the next one. 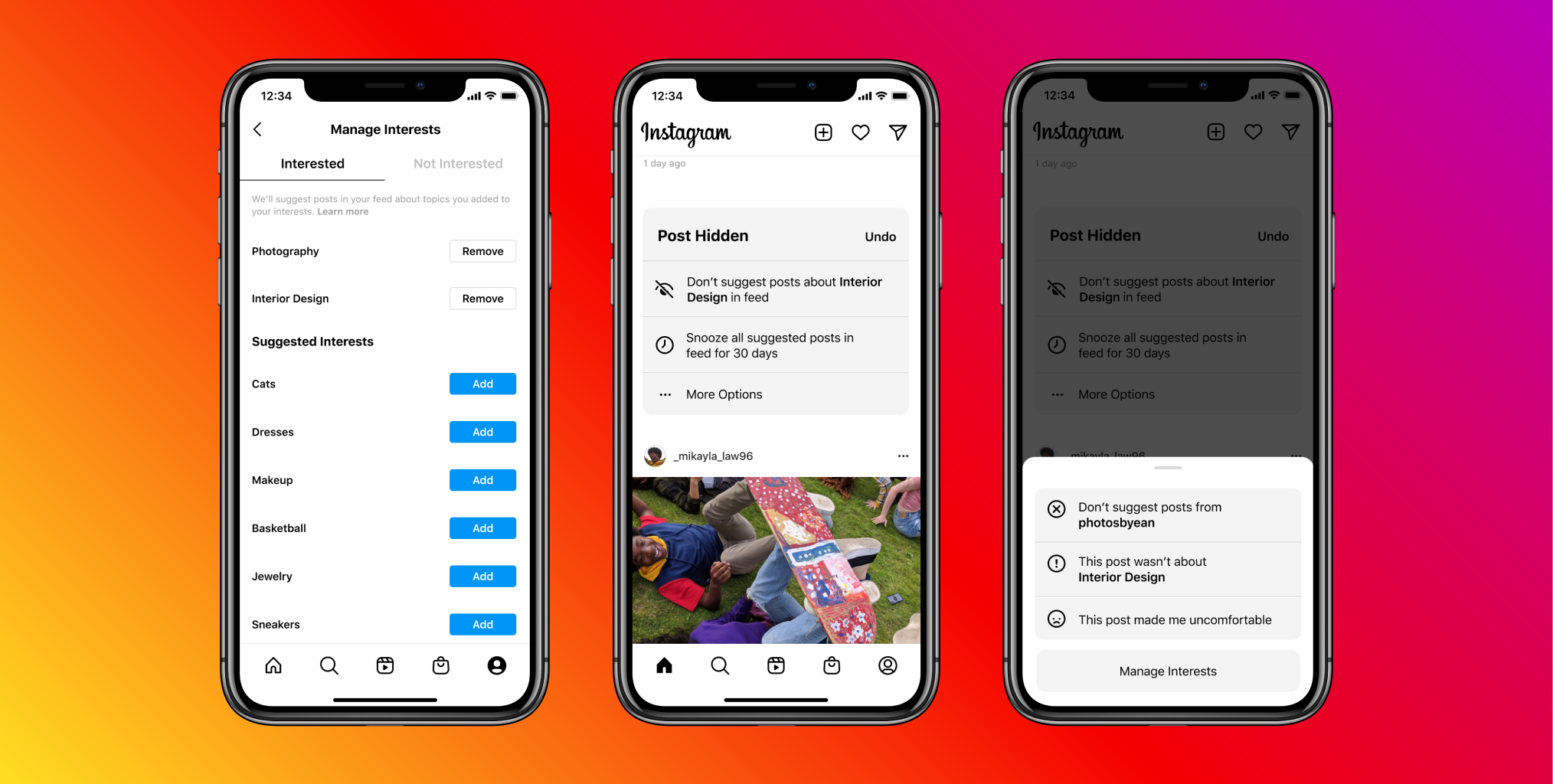 A Facebook spokesperson described the expansion of Suggested Posts to TechCrunch as an “extension” of the Instagram feed, noting that the ratio of these algorithmic recommendations to posts from followed accounts will be variable based on how someone uses the app.

The test will roll out to a small number of users in English-speaking countries only, though the company declined to specify how many accounts will be involved.

The experiment might not make it into the final product, but from the way the winds over at Facebook have been blowing lately it looks pretty likely. Like we mentioned, Instagram and parent company Facebook introduced some tools to give people more control over their own behavior on the notoriously addictive-by-design apps back in 2018, including the “You’re all caught up” message and a way to track time spent.

Those tools weren’t a sea change for a company that generally values keeping people glued to its services (and its ads) at all costs, but they showed that Facebook was at least mildly self aware of the conversation about social media addiction sweeping through the tech world at the time.

In 2020, it sounds like Facebook is done humoring those concerns. Instagram is feeling the heat from TikTok’s preternaturally well-tuned endless algorithmic feed and booming success. Like it has so many times in the past, the company is looking to shift its own identity to chase a threatening competitor rather than staying the course or trying something new.

The new way Suggested Posts work is just a test for now, but mixing algorithmic suggestions into the feed with posts from accounts you follow would be a pretty big change to the core way the app works. As it stands, if people want a truly endless Instagram experience they could turn to the Explore tab or scroll past the “caught up” message. Many doubtless did to stave off boredom, to the likely detriment of their mental health.

But under the test, it will be less possible to use Instagram to only keep up with just the accounts that you’ve got a personal interest in, whether they’re friends, local businesses or influencers of your choosing. Instagram wants to inject more of what it wants you to see into that experience, or what the company believes you’d want to see but you just don’t know it yet.

The end result might not be that noticeable for people who follow huge swaths of accounts already and rarely meet the end of their feed, but it strays even further from the original product — a distant memory at this point — while giving Instagram a way to keep people on the app for longer while serving them more ads.