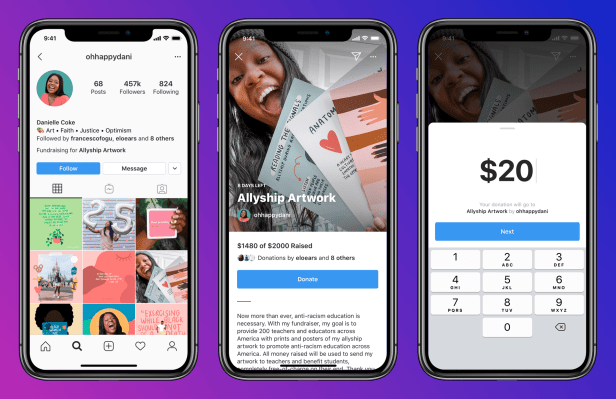 Instagram today announced a new tool for personal fundraisers. The company says it’s beginning a small test of the feature, which will allow users to link directly to a fundraiser from their profile page. The test will initially run in the U.S., U.K. and Ireland on Android, followed by iOS. While users can choose to either start a cause or support an existing one, Instagram says all fundraisers will be first vetted to ensure they meet the existing guidelines and rules.

These rules include a list of supported fundraising categories, and detail in which cases a fundraiser would not be approved. The same rules also apply to Facebook fundraisers.

To get started with Personal Fundraisers, users with access to the feature will tap “Edit Profile,” “Add Fundraiser,” followed by “Raise Money.” You’ll then choose a photo, select the fundraiser category and enter further details to tell the story and encourage donations. When approved, you’ll be able to raise funds for 30 days with the option to extend fundraising just once for 30 more days.

In other words, the feature is meant to support more time-sensitive causes, rather than serve as a replacement for ongoing fundraising efforts.

Donations to the fundraiser itself will be powered by Facebook Pay, which also powers Instagram’s new shopping features.

In the next several months, Instagram says it will expand the feature to allow users to share their fundraiser in both their Feed and within Stories.

The addition isn’t the only way Instagram is supporting fundraising.

The company had already offered eligible nonprofits and supporters to raise money for charity with Donation Stickers for Stories, and more recently with a Live Donations feature for live streams. While the company covers fees made to nonprofits, it does charge fees for personal fundraisers based on the country where the creator of the fundraiser is located.

Fundraising has become a popular activity across Facebook’s platforms. Already, users have raised more than $100 million for COVID-19 initiatives and causes on Instagram and Facebook combined since January, for example. And in the last 30 days, donations on Instagram have doubled in the U.S.

The test of Personal Fundraisers is rolling out to a small number of users, but Instagram says the plan is to expand the feature in the months ahead.