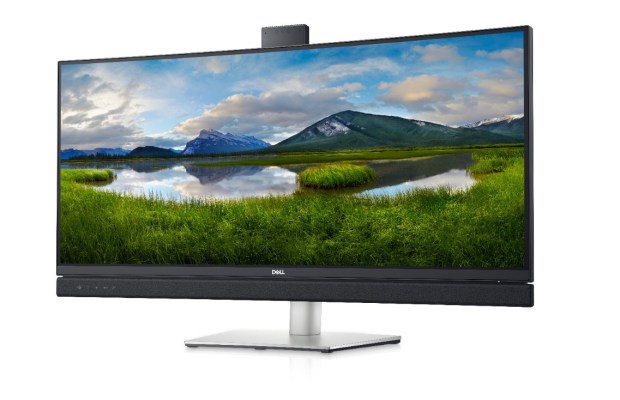 Dell’s latest monitors reflect the growing need for simple, solid solutions to video conferencing needs, with a clever pop-up camera and a perhaps too clever by half Teams integration. The new displays integrate a number of advanced features — but they’re still made strictly with offices in mind.

The new Dell 24, 27 and 34 Video Conferencing Monitors are clearly meant to be a turnkey solution to the need at many companies for video-capable setups that don’t cost a fortune.

The most interesting feature is a pop-up camera at the top; this isn’t the first one of these by far (we’ve seen them going back a few years) or even the first by Dell, but it is the first of theirs in a monitor as opposed to an all-in-one system, and it is probably the best one yet.

The five-megapixel camera (which translates to somewhat more than 1080p, likely around 3K) won’t blow any minds, so if you want things like optical background blur and improved lighting, you’ll have to build your own setup. But it should be perfectly fine for work calls and having it slip away when not in use is reassuring to the privacy-conscious.

An additional, nonobvious reason to like this setup is it means the camera isn’t confined to the bezel of the monitor itself, possibly allowing for a better lens and bigger sensor. I’ve asked Dell for the detailed specs and I don’t expect anything extraordinary, but it’s always better to have space than to pack the camera module into the margins.

At the bottom of these new screens is a pleasantly felted speaker bar, with just enough wattage for calls to sound fine — it won’t work for bangers, though.

But on the left side of that speaker are some interesting, if not entirely practical, new buttons. Most prominent is a dedicated Microsoft Teams button, along with call, volume and mute buttons.

I don’t know about you, but I wouldn’t want one of those. And not just because we don’t use Teams.

Maybe this is just me, but I don’t like the idea of reaching forward and whacking my monitor, which I’ve carefully positioned, every time I want to adjust the volume or answer a call, or mute myself — good luck doing it subtly when the whole view shakes every time. Even if I did, I wouldn’t want a button dedicated specifically to a single brand of video conferencing. Seems limiting when so many video platforms are in play.

I would be far more likely to pay for a puck with those controls on it as well as a mono speaker for voices and mic that’s closer to me. And by the way, it might be better to leave noise cancellation to the software side of things — calling apps often integrate their own, and who knows how built-in noise blocking interacts with those.

No doubt this is a simpler product solution, of course, and also presumably one that Microsoft and Dell worked together on. The pop-up webcam also has an IR camera that works with Windows Hello, the face-recognition login method I didn’t realize existed until very recently.

Obviously this is Dell and Microsoft going after enterprise customers who are already in their ecosystem. But as a Dell monitor lover myself, I wouldn’t mind having a pop-up camera — minus the unnecessary sound bar and Teams button. Where’s the love, Dell?