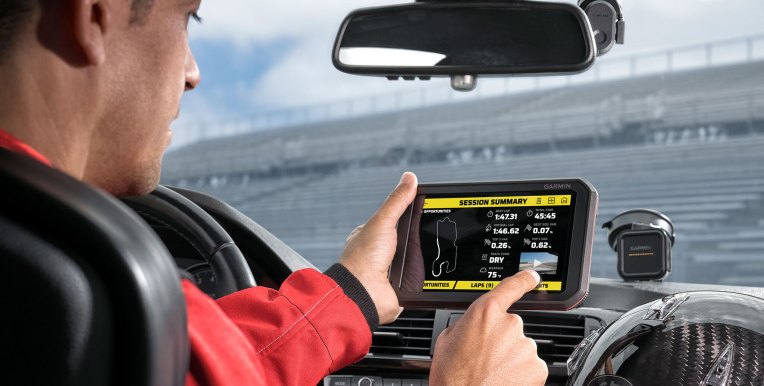 Garmin today is announcing a $999 GPS unit designed specifically for motorsports. Called the Garmin Catalyst, the unit aims to be a motorsports coach of sorts, helping drivers improve lap times, and more. It’s the latest example of Garmin testing different markets now that GPS units are built into most vehicles.

Like standard GPS units, the Catalyst mounts on the windshield and provides detailed maps for the driver. However, because this is for racing around tracks, instead of providing driving directions, the Catalyst is said to provide motorsports coaching with voice instructions and detailed analysis of the driver’s performance.

Adam Spence, Garmin product manager explains, “[The Catalyst] gathers several data metrics and identifies where laps can be seamlessly joined together to create the fastest racing line. This shows users their fastest achievable time based on lines actually driven and gives them an optimal lap they can truly achieve.”

The GPS unit uses a series of sensors and components to generate the car’s racing line on the track. The included camera captures 1080p video, which can be played back on the unit with the track data overlaid showing speed, lap data and more.

When driving, the Catalyst is said to be able to provide adaptive instruction to the driver based on past driving laps, instructing the driver on when to turn in, apex and exit turns, along with braking data when needed. This information can playback through compatible headsets or the vehicle’s Bluetooth stereo.

Data and track information can be viewed on the device itself or exported to a mobile device or computer.

The system is the latest product from Garmin, which is trying to bring its GPS know-how to niche markets. Previously, the company unveiled a similar unit for overland vehicles. Based on pictures, the Overlander and the Catalyst seem to use the same mounting hardware and have a similar design, albeit the Overlander appears more rugged.