Cosmos Video — a ‘Club Penguin for adults’ to socialise and work — raises $2.6M from LocalGlobe – TechCrunch 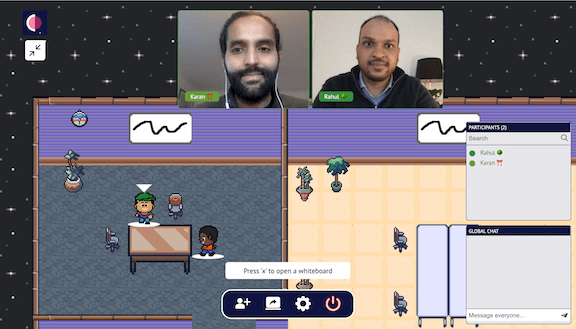 All over the world startups are piling into the space marked “virtual interaction and collaboration”. What if a startup created a sort of “Club Penguin for adults”?

Step forward Cosmos Video, which has a virtual venues platform that allows people to work, hang out and socialize together. It has now raised $2.6 million in seed funding from LocalGlobe, with participation from Entrepreneur First, Andy Chung and Philipp Moehring (AngelList), and Omid Ashtari (former president of Citymapper).

Cosmos allows users to create virtual venues by combining game mechanics with video chat. The idea is to bring back the kinds of serendipitous interactions we used to have in the real world. You choose an avatar, then meet up with their colleagues or friends inside a browser-based game. As you move your avatars closer to another person you can video chat with them, as you might in real life.

The competition is the incumbent video conferencing platforms such as Zoom and Microsoft Teams, but calls on these platforms have a set agenda, and are timeboxed — they’re rigid and repetitive. On Cosmos you sit on the screen and consume one video call after another as you move around the space, so it is mimicking serendipity, after a fashion.

As well as having a social application, office colleagues can work collaboratively on tools such as whiteboards, Google documents and Figma, play virtual board games or gather around a table to chat.

Cosmos is currently being used in private beta by a select group of companies to host their offices and for social events such as Christmas parties. Others are using it to host events, meetup groups and family gatherings.

Co-founder Rahul Goyal said in a statement: “Once the pandemic hit, we both saw productivity surge in our respective teams but at the same time, people were missing the in-office culture. Video conferencing platforms provide a great service when it comes to meetings, but they lack spontaneity. Cosmos is a way to bring back that human connection we lack when we spend all day online, by providing a virtual world where you can play a game of trivia or pong after work with colleagues or gather round a table to celebrate a friend’s birthday.”

George Henry, partner at LocalGlobe, said: “We were really impressed with the vision and potential of Cosmos. Scaling live experiences online is one of the big internet frontiers where there are still so many opportunities. Now that the video infrastructure is in place, we believe products like Cosmos will enable new forms of live online experiences.”