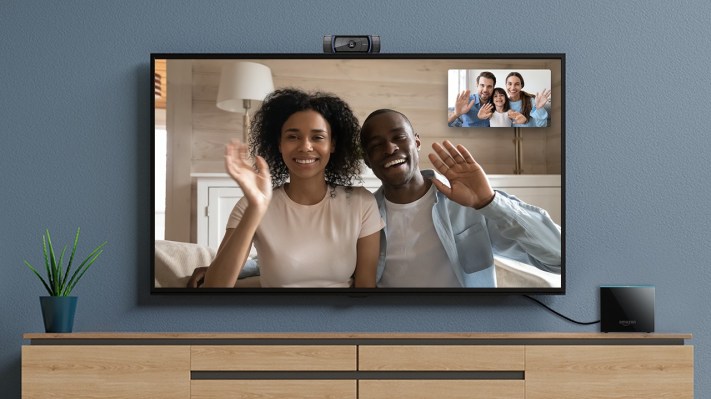 Amazon in September announced it was bringing video calling support to its Fire TV platform. Today, the company says two-way video calling is now available with its Fire TV Cube devices (2nd gen.). The new feature will allow customers to pair a third-party webcam with their Fire TV Cube in order to make and receive video calls from their TVs to any other Alexa device with a screen.

That means customers could call other Alexa owners who have a Fire TV Cube of their own, an Echo device with a screen like the Echo Show or even just the Alexa app installed on a smartphone or tablet.

For the feature to work, Amazon says the third-party video cams will need to meet certain minimum requirements, including UVC support, 720p resolution and 30 frames per sec (fps). Amazon, however, recommends that a better experience will be had with cameras with 1080p resolution and 60-90 degree field of view (FOV). It advises against 4K webcams.

The company also says a better experience will be had with a field of view from six to 10 feet away from the TV, but not greater than 12 feet.

The webcams themselves are connected to the Fire TV Cube via a Micro USB to USB adapter.

Once connected, users will need to open the Alexa app on their phone to enable the messaging and calling options, if they had not already, and import their contacts.

To place a call, Alexa owners can say things like “Alexa, call Julie’s Echo,” for example. They can then control the call experience with voice commands like “Alexa, video on,” “Alexa, volume up,” “Alexa, answer” and “Alexa, end call,” among others.

Video chat support has been one of the key features for smart screens, like Amazon’s Echo Show, but it makes sense to bring support for video calls to the living room’s big screen, too, where possible. But unlike competitors in this space, Amazon doesn’t have an ecosystem of communication apps to leverage here, the way that Google Nest Hub Max has with Google Meet and Duo, or how Facebook Portal can reach family and friends on Facebook and WhatsApp. That could potentially limit adoption for the feature, as it requires the other user is plugged into the Amazon ecosystem as well.