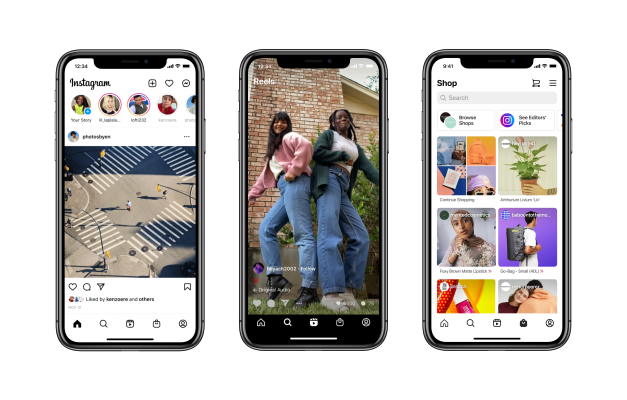 Instagram today is launching Shopping in Reels, its TikTok competitor. The new feature was announced in October as something the company had in the works, as part of a ongoing series of shopping-related updates to the Instagram app. With today’s launch, both businesses and creators will be able to tag products when they create Reels — the short-form videos that now have their own tab in Instagram following last month’s redesign.

The company says many Reels already feature shopping content, like fashion looks, makeup and skincare, or other product how-tos. When people view an Instagram Reel with this content, they’ll be able to now tap a “View Products” button to either buy, save or learn more about the featured products.

In addition, creators can add a “Branded Content” tag to their Reels to be transparent about when they’re working with a brand to promote their products, which is a form of paid promotion.

The update makes shopping an even larger focus for Instagram than it already was, and arrives at a time when video-based shopping is seeing increased adoption. In particular, a growing number of startups focused on live-stream video shopping are finding traction. In recent months, investors have backed companies like live shopping platforms Popshop Live and Bambuser, for example, while major tech companies, including Alibaba, Amazon, Google and JD.com, have also joined the video shopping trend in various ways.

Most importantly, perhaps, is that Instagram rival TikTok recently partnered with Shopify on e-commerce and today caters to brands that either advertise directly or work with influencers on its platform, eating into Instagram’s market. TikTok had also fielded interest from Walmart, when the Trump ban had forced the company to enter negotiations around a U.S. exit. And TikTok’s app in 2020 beat out Instagram as one of the world’s most downloaded apps, indicating a seismic shift in how younger users interact with social media.

Hoping to not be left behind, Instagram has revamped its app — to much user criticism when it relocated key home screen features — with the goal of becoming a top online shopping destination, as well. The company generates revenue when customers checkout in the app using Facebook Pay, which will allow it to make money outside of running ads.

Today, Instagram users can shop from videos in Feed, Stories, Live, IGTV and, with this latest launch, Reels.

The company says the feature is rolling out globally, starting today.