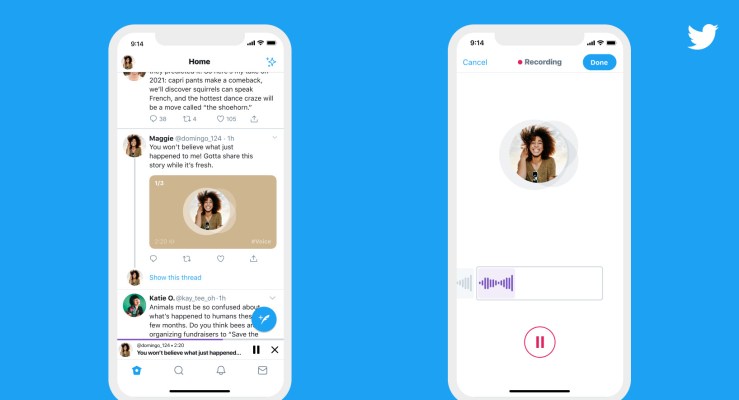 Twitter is rolling out to its platform a new type of tweet — audio tweets — allowing users to share thoughts in audio form inside their feeds. The feature will only be available to some iOS users for now, though the company says all iOS users should have access “in the coming weeks.” No word on an Android or web rollout yet.

For users with access to the new feature, the process is pretty straightforward. Users can write a new tweet as they normally might, but now, alongside options to attach a photo or video, there’s a new button where users can record a quick audio message. Twitter shared the full workflow in a tweet from the company’s official account.

“Over the years, photos, videos, gifs, and extra characters have allowed you to add your own flair and personality to your conversations,” a blog post from Twitter announcing the feature reads. “But sometimes 280 characters aren’t enough and some conversational nuances are lost in translation. So starting today, we’re testing a new feature that will add a more human touch to the way we use Twitter – your very own voice.”

Twitter’s brevity has always been a ceiling that the social network has seemed to push up against with new products. In 2017, the company announced it was expanding the limits on tweets from 140 to 280 characters. This feature potentially allows for much longer thoughts to be shared on the service, limiting audio clips to 140 seconds. For users chatting away when the limit is reached, instead of being cut off, a new tweet will be threaded beneath the original, allowing the thoughts to continue pouring out.

The limit is still an interesting one, indicating that Twitter isn’t racing to turn into a podcast platform, but is instead hoping this feature can enable a new type of communication that fits into the existing conversation flows.

One thing that’s certainly an open question is how audio tweets will add to Twitter’s abuse problem. Twitter has plenty of challenges when it comes to flagging harassment among text-only tweets, which are much easier to auto-flag with machine learning tools. Decoding abuse in audio snippets is a much taller order for these systems. Furthermore, scrubbing through content that’s been reported manually is going to be more time-consuming for content moderators.

Audio has been a rolling trend in social networking. Over the past couple of years, podcasts have become a hotter space with companies like Spotify investing heavily in startups and content acquisition. Recently, investors in Silicon Valley raced to fund Clubhouse, an audio-based social network that has gathered a lot of attention over the past several months.