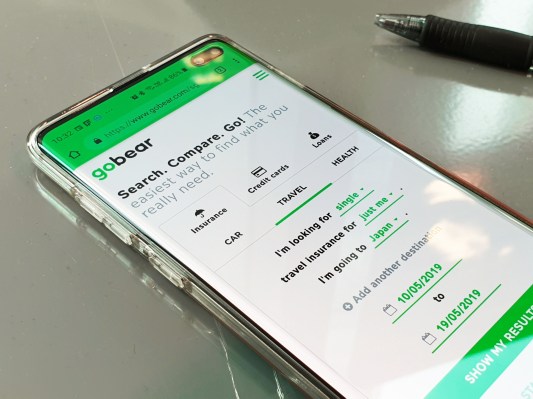 Founder and CEO Adrian Chng told TechCrunch that GoBear will focus on what it calls its “three growth pillars”: an online financial supermarket that evolved from the company’s financial products aggregator/comparison service; an online insurance brokerage; and its digital lending business, which it recently expanded by acquiring consumer lending platform AsiaKredit.

GoBear originally launched in 2015 as a metasearch engine, before transitioning into financial services. The company now works with over 100 financial partners, including banks and insurance providers, and says its platform has been used by over 55 million people to search for more than 2,000 personal financial products.

The startup serves consumers who don’t have credit cards or other access to traditional credit building tools. Similar to other fintech companies that focus on underbanked populations, GoBear aggregates and analyzes alternative sources of data to judge lending risk, including patterns in consumer behavior. For example, Chng said if a loan application is filled out in less than a minute, it is more likely to be fraudulent, and applications made between 8:30PM and midnight are less risky than ones made between 2AM to 5AM.

Data points from smartphones is also used to assess creditworthiness in markets like the Philippines, where the credit card penetration rate is less than 10%, but more than 40% of the population uses a smartphone.

Despite the COVID-19 pandemic, Chng said GoBear has been gross margin positive since the end of 2019. Interest in travel insurance has declined, but the company has continued to see demand for other insurance products and lending. Its online insurance brokerage has grown its average order by 52% over the last three months, and the company has seen 50% year-over-year growth from its loan products.

There are other fintech companies in Asia that overlap with some of the services that GoBear offers, like comparison platform MoneySmart, CompareAsiaGroup and Grab Financial Group. In terms of competition, Chng told TechCrunch that not only is the market opportunity in Asia huge (he said there are 400 million underbanked people across GoBear’s seven markets), but the company also differentiates with its three core services, which are all interconnected and draw on the same data sources to score credit.

“The momentum is here. I think now is the time for tech and data to transform financial services,” he said. “As a platform, we are really looking for partners to come with us for the next phase of growth and investment. I feel positive even with COVID-19, because I think that we will have more acceleration, and the opportunity to change people’s lives and benefit them and investors by solving tough problems will only increase.”