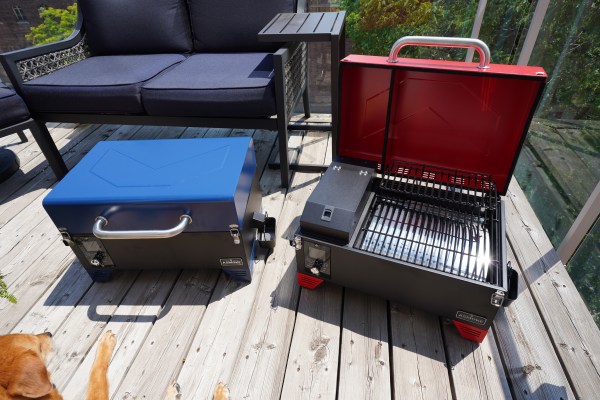 Smokers and pellet grills are growing in popularity, likely because a lot more people are cooking at home — and looking for other ways to up their home chef game. The Asmoke Pellet Grill, which is currently in the final stretch of a crowdfunding campaign on Indiegogo, has a price point that’s far below most other options out there — but don’t let the price tag fool you, the grill packs more punch than its cost and portable size might suggest.

If you’re not familiar with pellet grills, they’re a combination of smoker and BBQ that burn condensed hardwood pellets fed by an auger to create smoke and heat. The most popular options out there include Traeger’s grills, as well as Camp Chef, Pit Boss and others. The Asmoke Pellet Grill is a new, portable pellet grill that features a lot of the same features you’d see in higher-priced brand-name options, but at a much lower cost when you factor in their accessories — particularly now, during the tail end of their crowdfunding campaign.

Asmoke’s $176 USD price includes one grill, a meat injector, a thermometer, grill gloves, shredding tools for breaking down smoked meat, tongs and a 5-pound bag of their applewood pellets to get you started cooking right away. That’s more than half-off their estimated retail price once the campaign ends. Even at the full final price you’re still going to come out cheaper than the closest brand-name competitor — the Traeger Ranger — once you factor in all the included accessories. 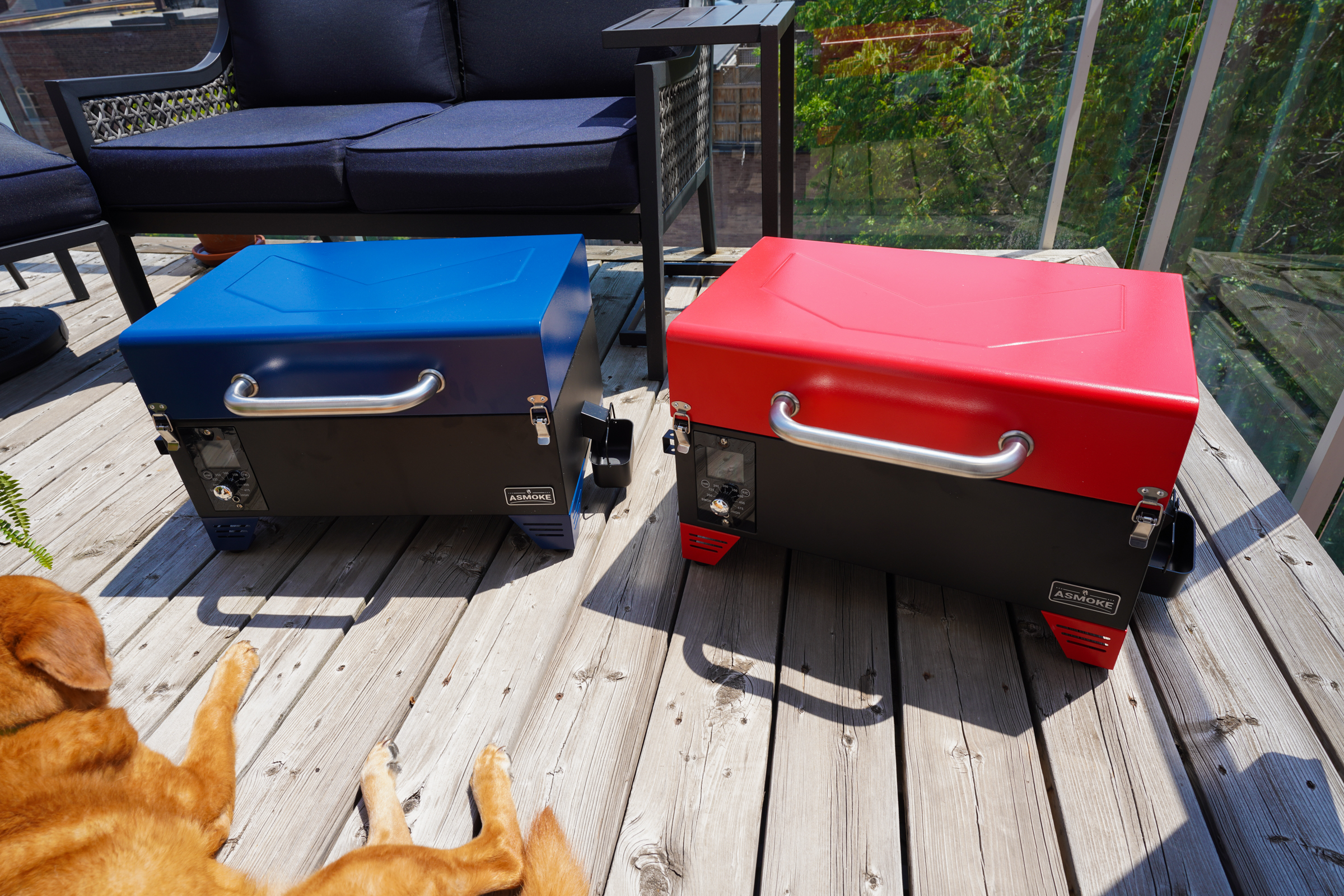 The Asmoke is electrically powered, so you can use it outside anywhere you have access to an outlet. It includes a larger cooking surface that can fit up to eight burgers at once, or one full rack of ribs. As mentioned, there’s a temperature probe included that plugs into the front and displays the internal temp of any meat into which you insert it while cooking. A dial on the front provides the only control you need, enabling setting temp from 180 all the way up to 500 degrees Fahrenheit.

The Asmoke Pellet Grill is designed to be portable, at just over 2 feet by around 1.5 feet, and 14.45 inches tall. It weights around 45 pounds, which is heavy, but that’s still portable compared to most pellet smokers, which tend to be very large and essentially designed to sit in a fixed location. The Asmoke is also made from steel and stainless steel primarily, so that weight represents durability, which is good for an appliance designed to be used exclusively outside.

Construction of the grill feels very sturdy and high-quality, with good fittings and finishes across the board. The heat-resistant paint comes in four colors, including the red and blue shown, as well as an aquamarine green and black. Latches secure the lid while cooking, and there’s an insulating gasket that runs the length and width of the edge to keep the heat in while giving you a secure closure. A large handle opens and closes the lid, and four feet elevate the grill off whatever surface on which you’re resting it. 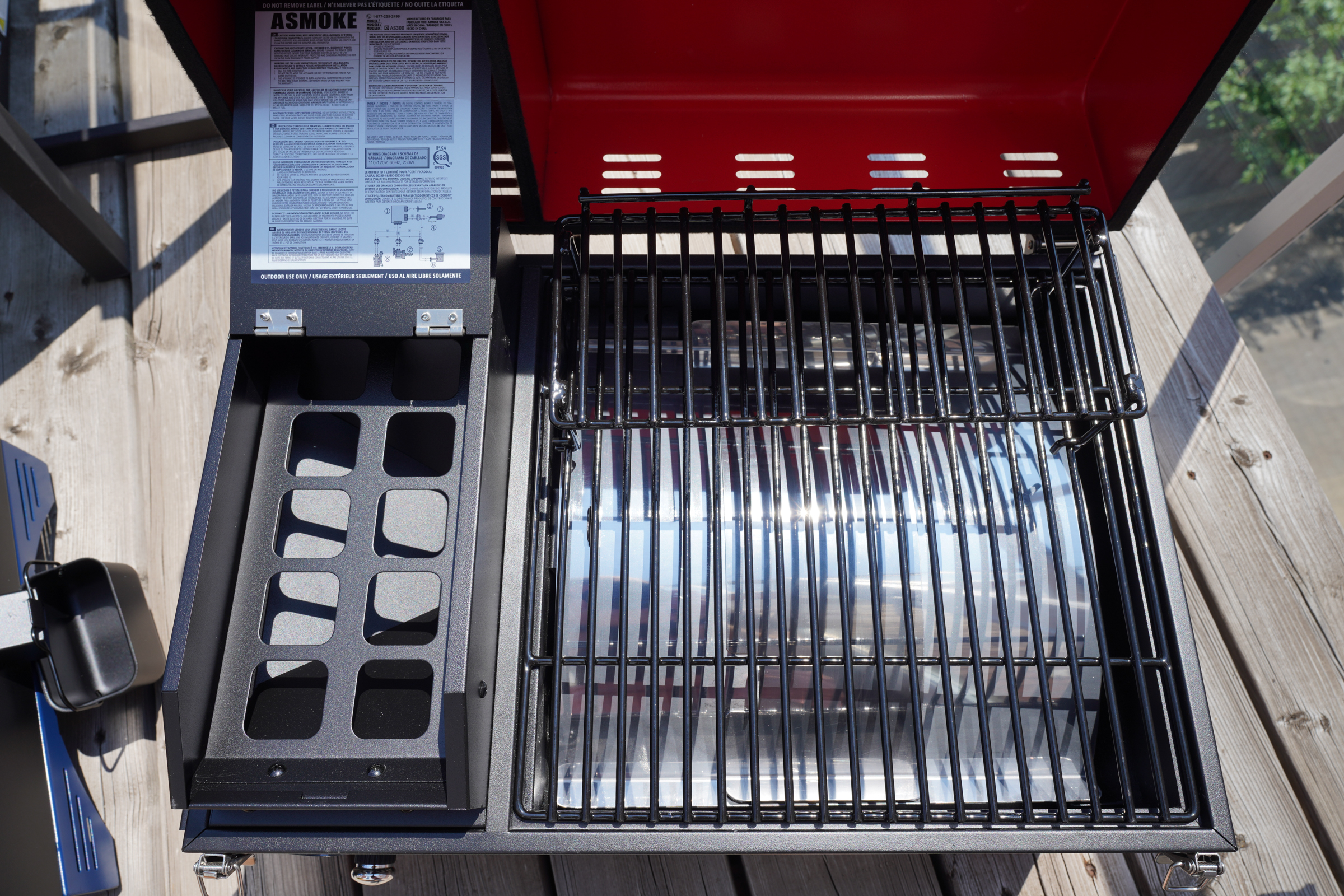 Inside, there’s a hopper where you put the pellets on the left, which is separated from the cooking area on the right. The cooking area includes a large grill surface, and an optional raised rack for a small second-level cooking area. A stainless steel grease slide installs over the cup where pellets are driven by the auger to burn and smoke, and a second slide goes over that — giving you the ability to keep it closed for smoking and grilling, or opening it up to allow flame through for char-broiling.

On the front is the control unit, which includes a large, readable display that uses a few different colors to clearly present information, including the set temperature of the grill, auger speed and sensor temperature when cooking with the probe. The large, single dial is your only control mechanism, providing temperature setting and letting you turn the grill on and off.

Some assembly is required to get the Asmoke ready to cook, but it’s actually super easy to do. Basically you just install the legs and front handle, and then remove all the internal components from their packaging and put them back in the grill. It took me about 20 minutes start to finish. The grill needs to be primed upon first use (and any time you run out of pellets), but that’s only a few more minutes. And the first time you ever use it, there’s a burn-off procedure that involves running the grill at higher temps for around 30 to 40 minutes, but it’s very easy to do.

The Asmoke punches above its weight class. In testing, I did an extended, seven-hour smoke of a pork shoulder blade roast using the provided Applewood pellets, and the results were fantastic. I’ve smoked a lot of meat using a Traeger Pro 575, and this was easily on par with the best results I’ve had out of that cooker in terms of the quality and flavor of the finished product. 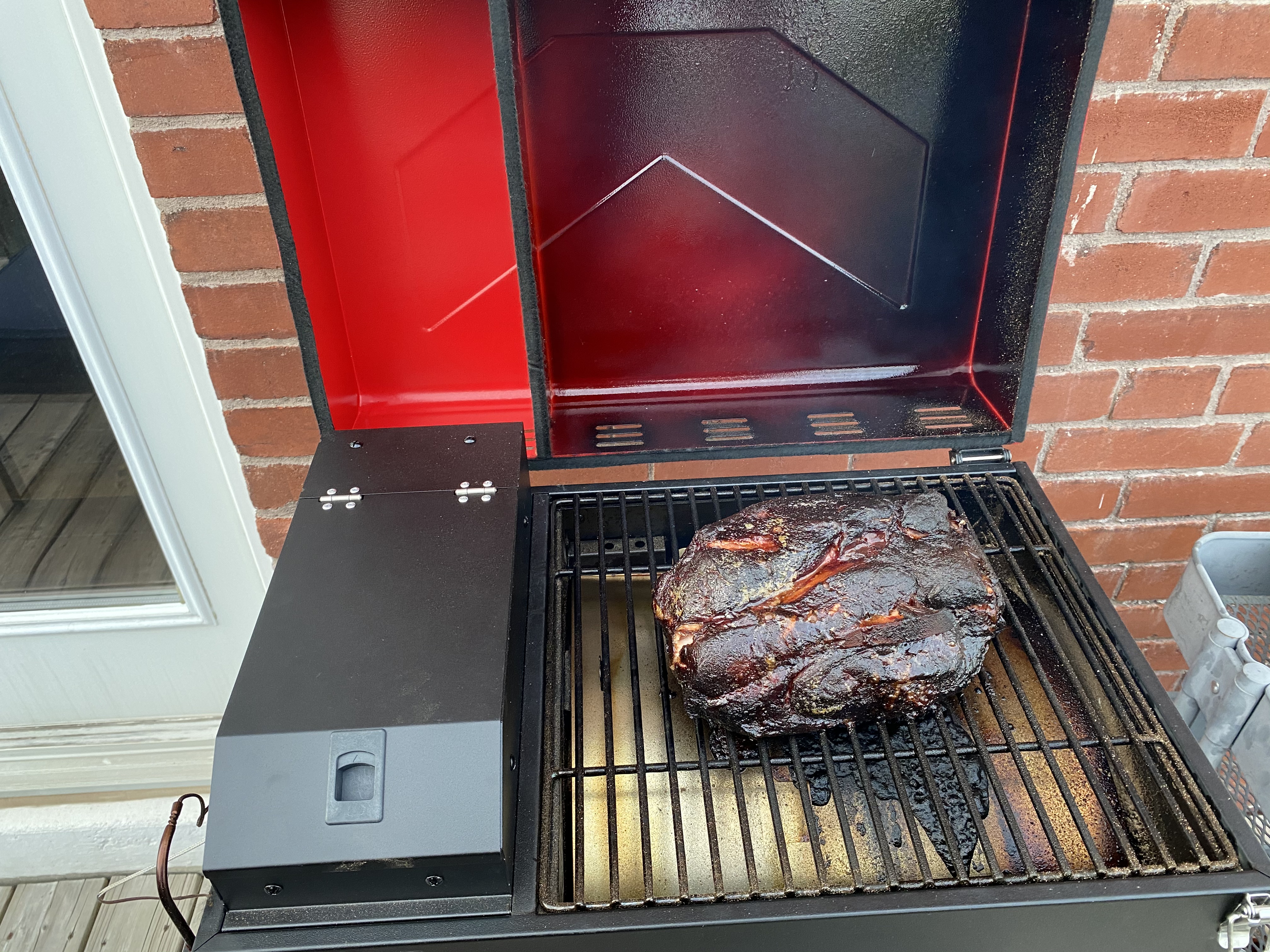 Best of all, the Asmoke is small enough to work on my condo deck, which is not somewhere I’ve typically been able to consider using a smoker cooker. The grill does put off a lot of smoke through its exhaust, particularly when it’s first heating up to reach temperature, but it also dissipates rather quickly, especially if you’re on a higher floor. Just be aware that especially in close proximity, the smoke produced from cookers like these will be powerful and strong-smelling — which is a benefit for me, but which might not be what you’re after if you’re living in a dense city environment.

Actually using the Asmoke is very simple. You can find smoker cooker recipes available readily on the internet, and then it’s a matter of just following those instructions. The Asmoke gets up to target temperature quickly, and is good at maintaining a constant temp throughout a cook once it reaches those levels. If you need to refill the hopper mid-cook, it’s simple enough to open the box and do so, and you won’t lose all that much temperature so long as you do it quickly. And because the hopper compartment is insulated separately from the cooking area, you can do it without fear of burning yourself.

Because the Asmoke offers such a wide temperature range, it’s also good or grilling, and even baking. I also made burgers on it at a much higher temp, and those results were fantastic, too — far exceeding standard BBQs in terms of retaining juices and adding subtle smoke flavor. 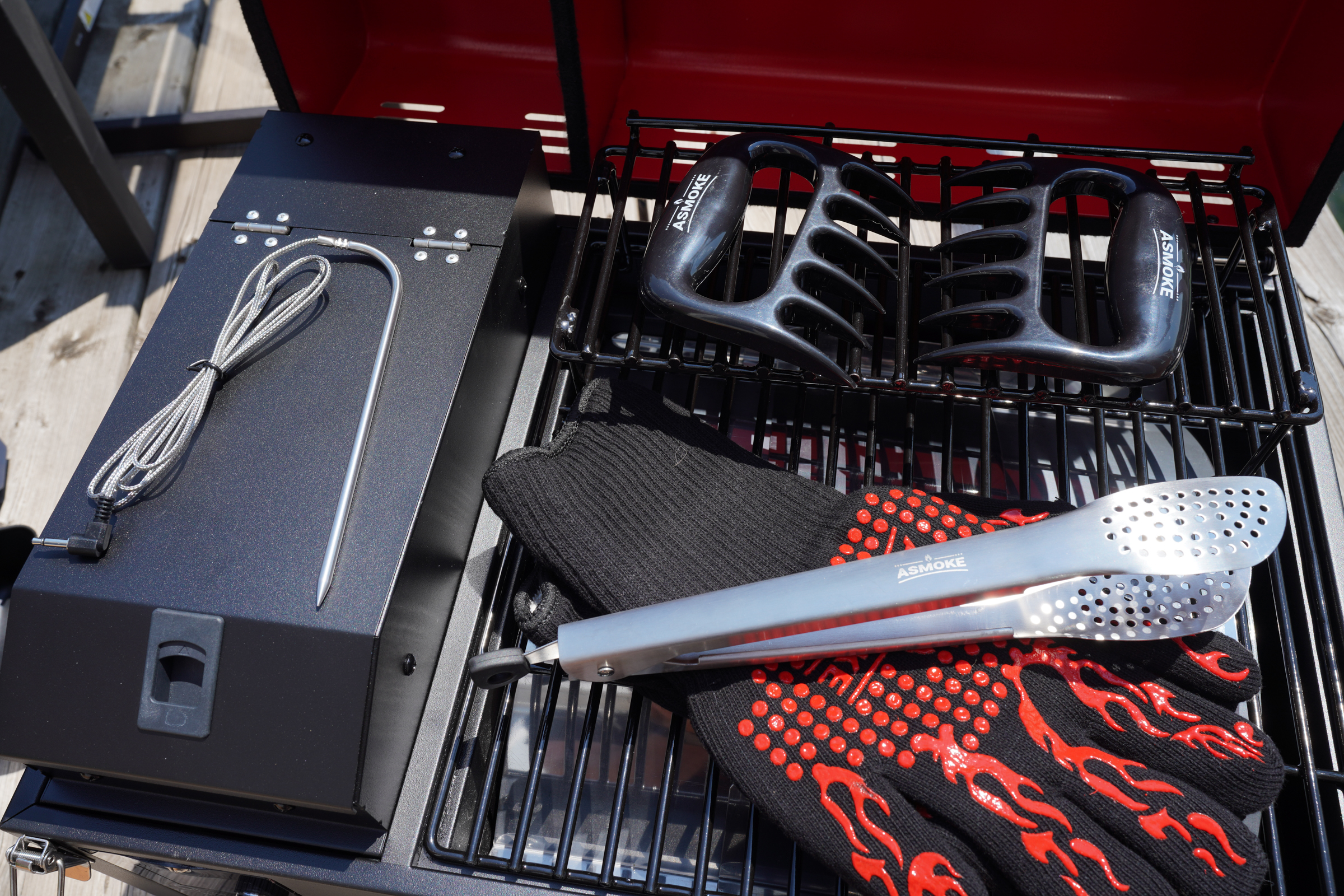 One thing to consider is that post-cook, especially after long ones like the pork roast I did, there’s a fair amount of cleaning up involved. It’s not difficult, but it is time-consuming, and includes scraping the grease tray, cleaning the cooking grate and vacuuming out the leftover ash from the pellet pot and the bottom of the cooking box. This isn’t specific to Asmoke: it’s part and parcel of operating any pellet cooker, and I found that Asmoke’s high-quality materials ensured it was relatively easy to clean.

If you’re looking to bump up your outdoor cooking game, the Asmoke Portable Pellet Grill is a remarkably affordable way to do so, especially during this crowdfunding effort. Normally, I’d advise caution in any crowdfunding scenario, but in this case, grills are already in the process of shipping to customers, and they work exactly as advertised, providing high-quality results.

This is a category where top-brand incumbents rightly earn a lot of respect and customer loyalty for their long history of delivering reliable products, so it’s hard for a newcomer to break in. But Asmoke’s product and results far exceed their newcomer status.