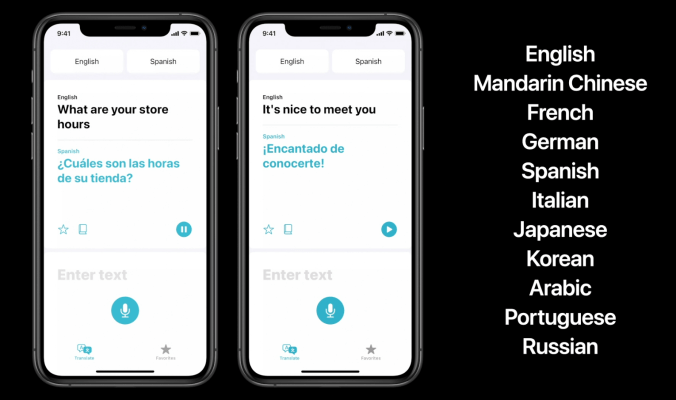 Translation is an everyday smartphone task for millions of people, but outside a few minor features, Apple has generally ceded the capability to its rivals. That changes today with a new first-party iOS app called, naturally, Translate, which works with 11 languages, no internet connection required.

The app is intended for use with speech or short written sentences, not to translate whole web pages or documents. The interface is simple, with a language selector, text field and record button as well as a few extra widgets like favorites and a dictionary.

At launch Translate will support English, Mandarin Chinese, French, German, Spanish, Italian, Japanese, korean, Arabic, Portuguese, and Russian, with others to come. You simply select a pair of languages and paste or record a snippet of text or audio. The translation should show up immediately.

There’s also a landscape mode that further simplifies the interface:

The best part is that unlike many translation apps out there, Apple’s is entirely offline, meaning you can use it whether you have good or bad signal, if you’re out in the middle of nowhere in a country where you don’t get service, or if you’re just trying to save data.

There were no specific release details so the app will probably appear when you upgrade to iOS 14.