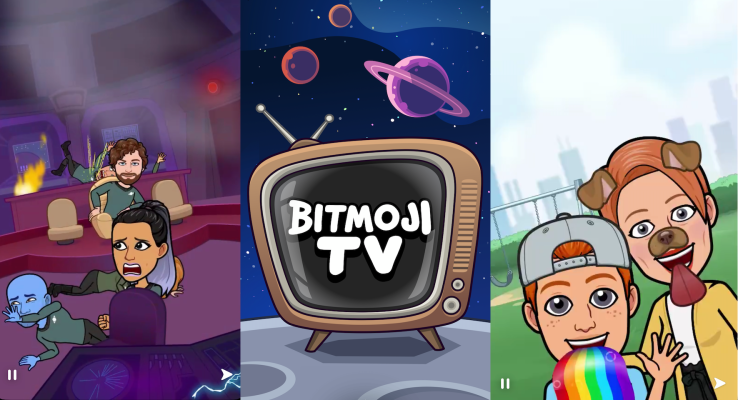 Snapchat’s most popular yet under-exploited feature is finally getting the spotlight in 2020. Starting in February with a global release, your customizable Bitmoji avatar will become the star of a full-motion cartoon series called Bitmoji TV. It’s a massive evolution for Bitmoji beyond the chat stickers and comic strip-style Stories where they were being squandered to date.

Creating original in-house shows for its Discover section that can’t be copied could help Snapchat differentiate from the plethora of short-form video platforms out there ranging from YouTube to Facebook Watch to TikTok. Bitmoji TV could also up the quality of Discover, which still feels like a tabloid magazine rack full of scantly clad women, gross-out imagery, and other shocking content merely meant to catch the eye and draw a click.

With Bitmoji TV, your avatar and those of your friends will appear in regularly-scheduled adventures ranging from playing the crew of Star Treky spaceship to being secret agents to falling in love with robots or becoming zombies. The trailer Snapchat released previews an animation style reminiscent of Netflix’s Big Mouth.

TechCrunch asked Snap for more details, including how long episodes will be, how often they’ll be released, whether they’ll include ads, and if the company acquired anyone or brought on famous talent to produce the series. A Snap spokesperson declined to provide more details, but sent over this statement: “Bitmoji TV isn’t available in your network yet, but stay tuned for the global premiere soon!”

The Snapchat Show page for Bitmoji TV notes it is coming in February 2020. Users can visit here on mobile to subscribe to Bitmoji TV so it shows up prominently on their Discover page, or turn on notifications about its new content.

Snap has had a tough few years as many of its core features have been ruthlessly copied by the Facebook family of apps. Instagram Stories killed Snap’s growth for years and effectively stole the broadcast medium from its inventor. Facebook also ramped up it augmented reality selfie filters, added more ephemeral messaging features, and launched Watch as a competitor to Snapchat Discover.

Two years ago I wrote that Facebook was crazy not to be competing with Bitmoji too. Six months later we were first to report Facebook Avatars was in the works, and this year they launched as Messenger chat stickers in Australia with plans for a global release in 2019 or early 2020. But Facebook’s slow movement here, Google’s half-assed entry, and Twitter’s lack of an attempt have given Snapchat’s Bitmoji a massive headstart. And now Snap is finally leveraging it.

“TV” is actually a return to Bitmoji’s roots. The startup Bitstrips originally offered an app for customizing the face, hair, clothes, and more of your avatar and then creating comic strips for them to appear in. Snap acquired Bitstrips back in 2016 for just $64.2 million — a steal not far off from Facebook snatching Instagram for under a billion. The standalone Bitmoji app blew up as soon as Snapchat began offering the avatars as chat stickers. It had over 330 million downloads as of April according to Sensor Tower despite Snapchat now letting you create your avatar in its main app.

Eventually, Snap began expanding Bitmoji’s uses. In 2017 Bitmoji went 3D and you could start overlaying them as augmented reality characters on your Snaps. The next year Snap improved their graphics, then launched the Snap Kit developer platform and Bitmoji Kit. This allows apps to build atop Snapchat login and use your Bitmoji as a profile pic. Soon they were appearing as Fitbit smart watch faces, alongside your Venmo transaction, and on Snapchat-sold merchandise from t-shirts to mugs. It’s part of a wise strategy to beat copycats by allowing allies to use real thing rather than building their own knock-off. That’s fueled the “Snapback” comeback which has seen Snap’s share price climb out of the gutter at $5.79 at the start of 2019 to $16.09 now.

One of Snap smartest innovations was Bitmoji Stories — the ancestor to Bitmoji TV. These daily Stories let you tap frame-by-frame through short comic strip-style interactions starring your avatar. Occasionally Bitmoji Stories would include rudimentary animation, but most frames were still images with text bubbles. Bitmoji could once again drive a narrative, rather than just being a communication tool. Still, they seem underutilized.

In 2019, Snapchat wised up. Bitmoji have become nearly ubiquitous amongst teens and Snapchat’s 210 million daily users. They’re the Google or Kleenex of cartoonish personalized avatars. Their goofy nature is also a perfect fit for Snapchat, and a reason they’re tough for stiffer and older tech giants to convincingly copy.

In April, Snap announced its new games platform inside its messaging feature that let you play as your Bitmoji against friends’ avatars in games ranging from Mario Party ripoff Bitmoji Party to tennis, shoot-em ups, and cooking competitions. Snap injects ads into the games, making Bitmoji key to its efforts to monetize its central messaging use case. Last month it launched custom and branded clothing for Bitmoji, which could open opportunities to earn money selling premium outfits or showing off brand sponsorships.

To truly take advantage of Bitmoji’s unique popularity, though, Snap needed to build longer-form experiences with the avatars at the center that . Stickers and Stories and games were fun, but none felt like must-see content. With Bitmoji TV, Snap may have found a way to get users to drag their friends into the app. Since everyone sees their own Bitmoji as the star, the cartoons could be more compelling then ones with impersonal characters you might find elsewhere around the web.

But Bitmoji TV’s success will depend largely on the quality of the writing. If your avatar is constantly getting into funny, meme-worthy situations, you’ll keep coming back to watch. But Snap’s teen audience has a keen nose for inauthentic bullsh*t. If the Shows feel forced, too childish, or boring, Bitmoji TV will flop. Snap would be savvy to invest in great Hollywood talent to produce the episodes.

High quality Bitmoji TV shorts could rescue Snapchat Discover from its own mediocrity. There are a few strong brands like ESPN SportsCenter on the platform, and Snap has several original Shows with over 25 million unique viewers. It’s also greenlit additional seasons of Shows like Dead Girls Detective Agency and new biopic clips from Serena Williams and Arnold Schwarzenegger. Still, a scroll through the Discover and Shows sections reveals plenty of trashy clickbait that surely scares away premium advertisers.

Bitmoji TV could offer video that’s not only fun and snackable, but out of reach for competitors who don’t have a scaled avatar platform of their own. As with the recent launch of Snapchat Cameos, the company has realized that the most addictive experiences center on its users’ own faces. Snapchat turned the selfie into the future of communication. Bitmoji TV could make an animated recreation of your selfie into the future of content.