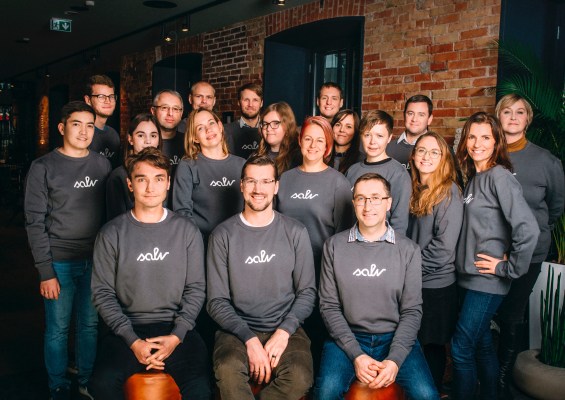 The round is led by Fly Ventures, alongside Passion Capital and Seedcamp. Angel investors also participating include N26 founder Maximilian Tayenthal (who seems to be doing quite a bit of angel investing), Twilio CTO Ott Kaukver, and Taavi Kotka, former CIO for Estonia (the actual country!).

Founded in June 2018 and initially offering consultancy, Estonia-based Salv has built a software platform that helps banks find and stop financial crime. The idea, says co-founder and CEO Taavi Tamkivi, is to move AML beyond just compliance to something more proactive that actually does defeat crime. That’s quite the promise, although he and his co-founders have a lot experience to draw from, both within fast-growing startups and AML.

Tamkivi built the AML, fraud, and Know Your Customer (KYC) teams at TransferWise and Skype. COO Scott McClelland also worked in the anti-fraud team at Skype, followed by a stint at TransferWise, first as an analyst and then in HR. And CTO Sergei Rumjantsev was also formerly at TransferWise, leading the engineering team responsible for KYC and verification.

“This was a highly demanding role, especially given how fast TransferWise was growing, how many new markets were coming online, and how central user verification is for compliance,” Tamkivi tells me. “Under Sergei’s leadership, the team made the verification process incredibly smooth over time for genuine customers. But also robust enough to protect TransferWise from on-boarding bad actors”.

Bad actors within financial services are aplenty, of course. Yet, despite the European banking sector spending billions tackling the problem, it is estimated that only 1-2% of global money-laundering is detected.

“AML should be all about stopping money laundering but, particularly in the last decade, layer upon layer of regulations have been added for banks to comply with,” says Tamkivi. “This would be great if that meant that there was no more money laundering, but sadly, that’s a long way off. Today, between $1-2 trillion a year is still laundered. But the excessive regulations mean that nearly all of a bank’s compliance team’s effort goes into compliance. They have very little energy left to actually focus on improving their financial crime-fighting abilities. The software they’re using is similar, focused almost wholly on compliance, not crime-fighting”.

That is where Salv wants to step in, and Tamkivi says the main difference between the startup’s AML software and other existing solutions is a much greater emphasis on crime-fighting rather than a box-ticking compliance exercise.

“We’re aiming to create a transformation similar to what’s happened in virus scanning,” he says. “10-15 years ago virus scanners on everyone’s PCs were an enormous hassle, consumed tons of resources and stopped you from getting work done. The same is true in financial institutions today. They’re using outdated, heavy software and processes to handle AML. But today, virus scanning still happens, but nobody’s worried about it. It happens in the background, with few resources. We’ll do the same in the AML world”.

In addition, the Salv CEO claims that the company’s software is faster than competitors’ offerings, both in terms of set up time and integration, and making changes to the rules the system adheres to.

“Our system, by contrast, takes a month or less to set up and minutes to modify the rules,” he says. “As a result, our customers can take everything they learn today from new criminal patterns, encode it in automated rules tomorrow, and repeat that cycle every day to protect their bank. Moving fast is the only way to keep up with the innovative organised criminals moving millions or billions around the world”.

To that end, Salv already counts Estonian bank LHV as its first customer. “They offer a full suite of banking products across Estonia,” says Tamkivi. “They’re also active in London, in particular, supporting fintechs. We have another couple of customers in the Lithuanian fintech scene. One of those is DeVere e-Money”.

More generally, Salv’s product is said to be suitable for Tier 2 and Tier 3 banks, as well as regulated fintechs and challenger banks.

Meanwhile, the business model is straightforward enough. Salv charges a monthly subscription, while the price varies based on the number of active customers a bank or fintech has.