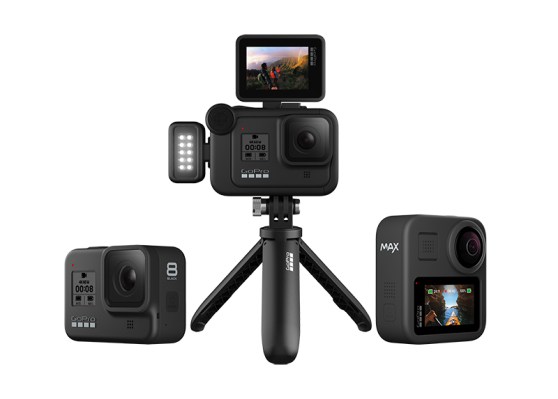 GoPro has released new versions of both its Hero line and its newer 360-degree ruggedized action cameras. The $399 GoPro Hero8 Black’s most significant change is that it gains a new body design that incorporates GoPro’s signature mounting system right into the case, so that you no longer need add-on frames to attach it to selfie sticks, suction mounts, body mounts and more.

The GoPro Hero8 Black shoots at resolutions between 1080p and 4K, and also gains HyperSmooth 2.0, the aptly named second-generation version of GoPro’s proprietary digital stabilization technology. The first version, which premiered on the GoPro Hero7, was hailed for its effectiveness, and the follow-up is apparently even more powerful — plus, it provides new adjustment options so you can tweak how aggressive it is.

GoPro’s proprietary variable speed recording mode TimeWarp also gets upgraded to 2.0, and there’s better on-board wind suppression for mic-free recording. The body changes mean that the lens is no longer removable, but GoPro is planning to release a new mounting system for filters soon to make up for this limitation.

On top of the new design, there’s a series of new aftermarket add-ons, which GoPro calls “Mods,” to provide add-on features. There’s a Media Mod ($79.99) that includes a built-in shotgun mic; a Display Mod ($79.99), which has a flip-up LCD viewfinder for vlogging; and a Light Mod ($49.99), which has a 200 lumen LED continuous video light source.

The other new camera, the GoPro MAX, is a $499 successor to the GoPro Fusion, and provides 360 capture. It’s designed to also produce great single lens, traditional wide-angle footage, and has its own version of HyperSmooth stabilization called Max HyperSmooth (which you know must be extreme because it’s called “Max”).

The MAX seems less oriented at 360 video and more at advanced content creators who want maximum editing flexibility and the ability to more easily vlog, as it also includes a front-facing display.

GoPro faces increased competition from legit sources in their home category, including competing devices from DJI and Insta360, but the slate of new upgrades here really do sound like quality, meaningful improvements versus the existing Hero7, and the new all-in-one body design should make it even more convenient for general use while out on the go.