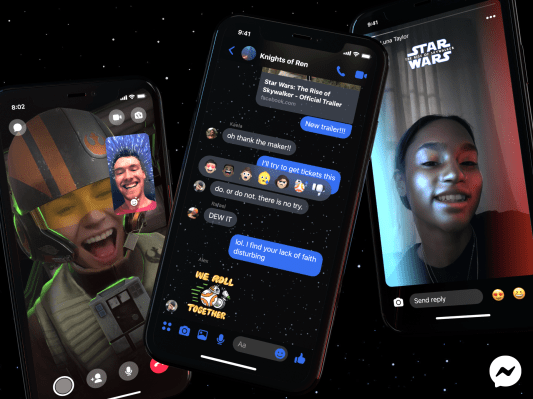 Star Wars has come to Facebook’s Messenger app. Facebook today announced a new set of Star Wars-themed features for Messenger users, including a chat theme, reactions, stickers, and AR effects. The features were developed in partnership with Disney to help promote the upcoming film, “Star Wars: The Rise of Skywalker,” which premieres nationwide on December 20.

Both the stickers and the reactions allow users to express themselves using characters from both sides of The Force, says Facebook. For example, you can laugh like Finn, act surprised like Rey, cry like C-3PO, act angry like Kylo, give a BB-8 thumbs up, or a Stormtrooper thumbs down.

Disney also helped to create a set of limited-edition AR effects which can be used both while taking photos and selfies or when you’re on video calls. 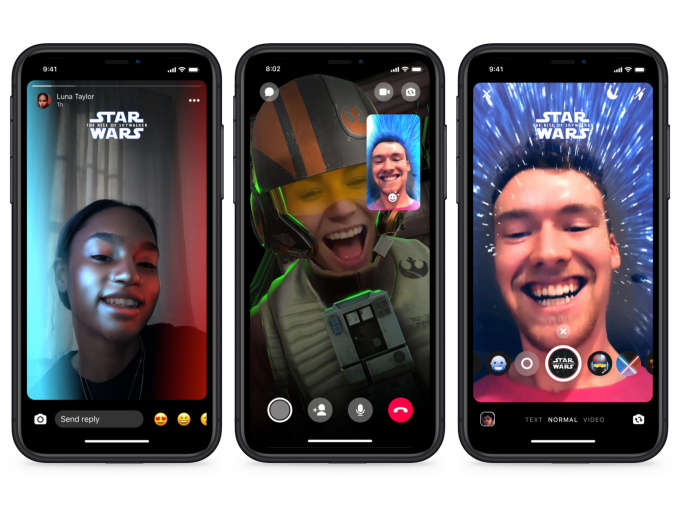 One, the Lightspeed Effect, gives the appearance of jumping into hyperspace. Another, the Cockpit Effect, lets you see yourself as a member of the Resistance, traveling across the galaxy in Poe Dameron’s X-Wing. The Dark vs Light Effect lets you choose your side of the Force.

There’s also a Star Wars chat theme you can enable from the Messenger thread settings which makes messages appear as if in outer space. (You access the Settings by tapping the thread’s name — typically the name or names of those you’re chatting with at the top of the screen, unless you or someone else has already renamed the chat.) 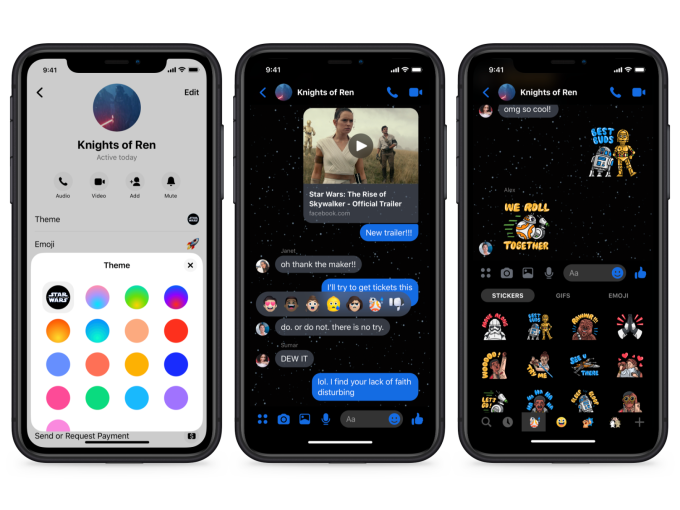 All the features are free to use.

This isn’t the first time Disney has partnered with a major tech company on a big marketing push around the Star Wars franchise. In 2015, Disney teamed up with Google to built out a new tool that let you theme its suite of apps, including Gmail, YouTube, Google Maps Chrome and others with either a Light Side or Dark Side effect. Facebook that year also let users change their profile photo to a Star Wars-themed pic where they posed with a red Dark Side cross-guard lightsaber or a Light Side blue one.

The sorts of collaborations benefit both parties. In the case of this new Messenger partnership, Disney gets to market its new movie to Messenger’s over one billion users. Meanwhile, Facebook gains increased usage and engagement for its popular Messenger app in a competitive market, where AR effects alone can be a key selling point for attracting users. As with many prior partnerships, no money exchanged hands here.

The new Star Wars features are rolling out today, December 12, to Messenger.