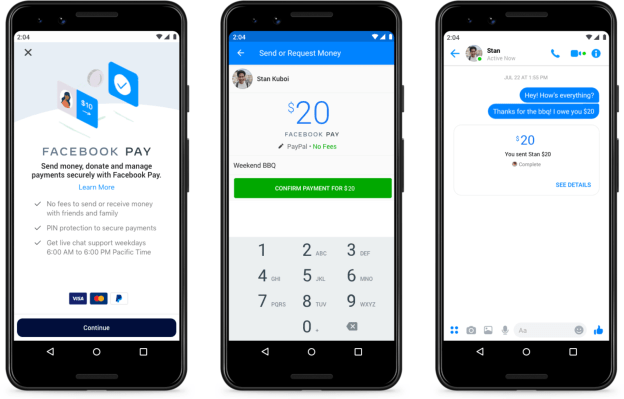 There’s really no shortage of ways to give people money via your phone, but that — nor growing calls that the company is already getting too damned big — isn’t stopping Facebook.

Facebook just announced Facebook Pay, a single payment system that ties into all of the things under the FB umbrella — Messenger, Instagram, WhatsApp and, of course, Facebook proper (for sections like Marketplace). Add a payment method once, and it’ll work across any of the Facebook apps for which you enable it.

Facebook says that Pay should start rolling out this week, albeit only on Facebook/Messenger at first, and only for folks in the U.S. The company says it should work with most major credit/debit cards and PayPal, and they’re being careful to note that this is separate from its whole cryptocurrency wallet effort.

Does anyone need this? Probably not. It removes some friction from the Facebook Marketplace process and will probably find a natural user base there — but, honestly, when it comes to paying a friend back for dinner or paying for that used guitar, there’s an absolutely monstrous mountain of alternatives here.