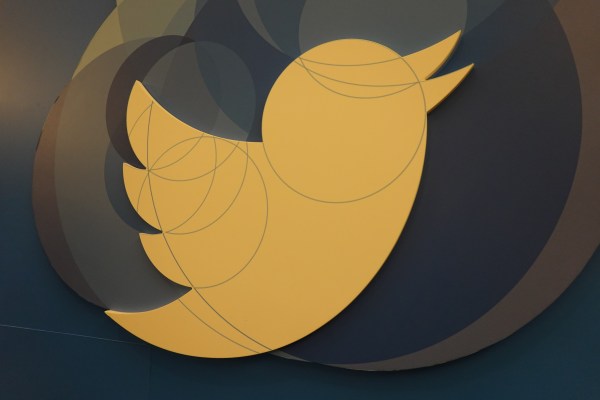 Chirp, a Twitter client preferred by hundreds of thousands of Apple Watch users, is getting its biggest upgrade since its arrival last year. Now redesigned for watchOS 6, the new version of Chirp includes a rebuilt timeline feature that allows you to endlessly scroll through tweets much more quickly than before, along with other enhancements, like support for iOS 13’s dark mode and a way to add colors to your Twitter username.

The app was first introduced to fill the void created when Twitter pulled its own Apple Watch app back in 2017 in favor of using Apple Watch’s notifications platform instead.

Chirp, meanwhile, lets users access a real Twitter client from their Watch’s small screen, which included a way to view your Home Timeline, Twitter Trends, @ Mentions, Direct Messages and more. Some features — like the ability to Direct Message or compose tweets from your Apple Watch — are only available to Chirp Pro paying users, though.

Chirp Pro is a user-friendly “pay what you want” feature that lets you chip in at either $4.99, $5.99 or $7.99 to upgrade the app and doesn’t require a subscription. To date, Chirp has around 200,000 installs, according to data from Sensor Tower. Conversions are much smaller. 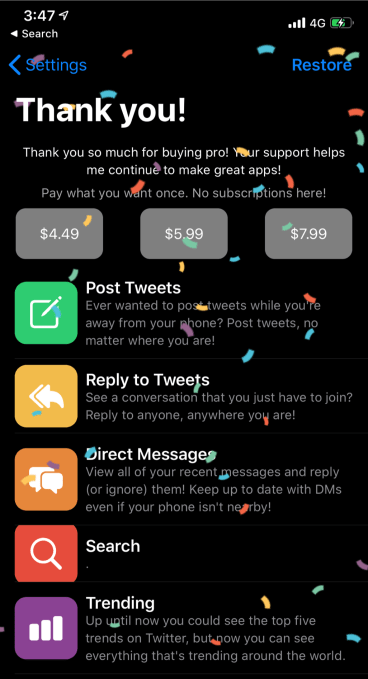 The new version, Chirp 2.0, hopes to encourage more upgrades as it enhances the Twitter-on-your-wrist experience with a redesigned timeline that endlessly scrolls faster and more reliably than before, and includes an improved video player, image grids and more.

“The inspiration for rewriting the timeline came from when I was fortunate enough to attend WWDC 2019 as a scholar,” explains Chirp developer Will Bishop. “During the keynote, Apple announced SwiftUI, a new framework that allowed developers to develop their user interfaces much faster than ever before. However, not only did it increase the speed, it opened up a whole new way to create apps for the Apple Watch,” he explains.

“Prior to SwiftUI, all user interface on Apple Watch was drag-and-drop, which, while convenient, has some major drawbacks. So feeling inspired from this announcement, I left the keynote hall and immediately began working on reimplementing the timeline with SwiftUI,” he says.

Direct messages were updated, too, and now include images and tweets that were shared through the private messaging feature.

Chirp 2.0 also introduces support for live complications on Apple Watch. That means you can see recent tweets right on the watch face, and tap on them to be redirected back to the Chirp app to reply, like or retweet. This feature is also available only to Pro users.

Another enhancement lets you add a little flair to your Twitter username by making it colorful — a feature that was inspired by a user’s request. Included as a one-off in-app purchase, it’s $1 for Pro users or $2 for non-Pro users to take advantage of this option. Bishop attributes the pricing decision to the backend work required to implement the feature on his part. It also makes for an additional revenue stream, by being available to those who don’t want to pay for the Pro version of the app. 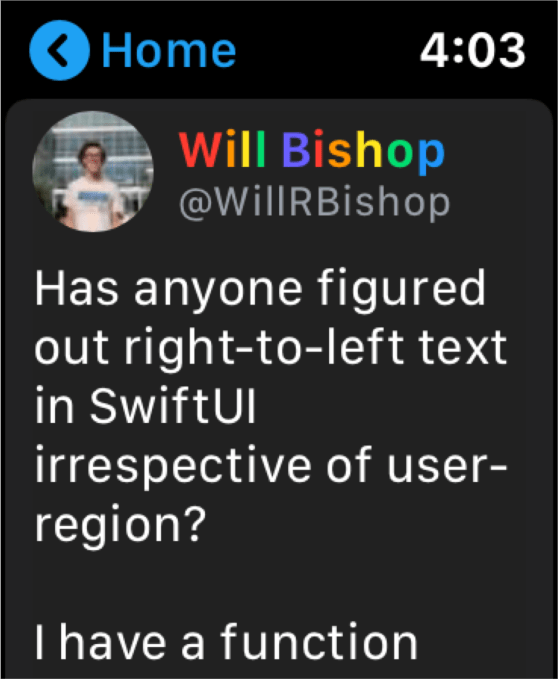 However, Bishop notes that the option will be available for free during Pride month (June) so everyone can make their username rainbow-colored, if they choose.

The app itself is a free download from the iOS or Apple Watch App Store.